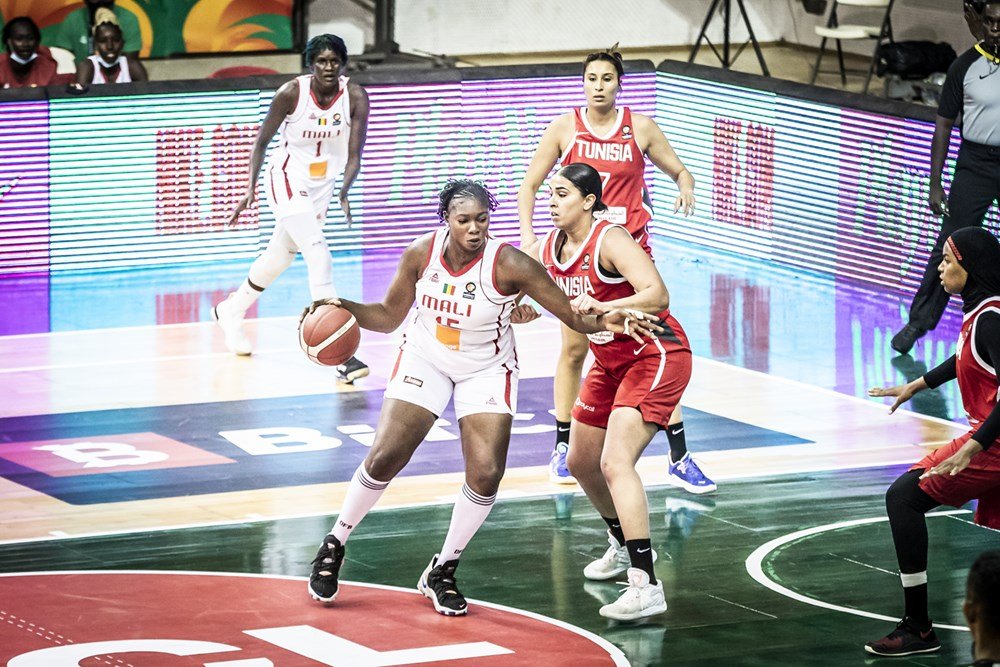 YAOUNDE (Cameroon) – It is no longer news that the FIBA Women’s AfroBasket 2021 holding at the Palais Polyvalent des Sports in Yaounde has reached a fever pitched stage as the Group Phase was rounded up Monday night, but one thing we try to bring to lovers of the beautiful game is some players who played a major roles for their respective countries.

And here we present five top performers who were able to distinguished themselves in the Championship so far, in no particular order.

Nigeria captain Elonu justified herself as a leader, motivator and on-court coach of the D’Tigress.

Though she appears on the quiet side, the 31-year-old is very composed and dedicated each time she is on duty for her fatherland.

The 1.85m (6f 1in) forward, who plays for Spar Girona in Spain, is one player who is not particularly about stacking up statistics for herself but the overall wellbeing of D’Tigress.

Little did she finish the Group Phase with a respectable average of 11.5 points, six rebounds, three assist and five steals from two games.

Yacine Diop is a tireless workaholic for Senegal. The 1.78m (5ft 8in) forward has given her hundred percent each time she was on the basketball court.

At 25, Diop is one player who does not back down not even in the face threat of defeat, motivating her teammates to take the battle to their opponents which has seen Senegal staying undefeated from Group C.

The Charnay Bourgogne SUD of France super forward has been among the driving force of the Lioness to be regarded as one of the frontrunners of the 26th edition of the FIBA Women’s AfroBasket.

Ewodo looks every inch unassuming and most times underrated by opponents which has been the key to what she has been able to do to get her country Cameroon going.

Her presence on the court usually don’t attract much attention from her markers and she has taken the opportunity to most times knock the ball down from behind the arch.

At just 23, and standing at 1.85m (5ft 8in), she has suddenly become the toast of both fans and most technical crew of her team and other teams here in Yaounde.

The Saint-Amand Hainaut of France forward finished the Group Phase with an impressive average of 13.5 points, four rebounds, 1.5 assist, 1.5 steal and one block shot.

Soraya Degheidy, the inspirational leader and tireless point guard of Egypt is a delight to watch any day. Whether her team is on the winning or losing side she plays with the same energy from start to finish.

At 26, she commands the respect of her teammates and coaching crew as a dependable ally.

The 1.72m (5ft 6in) point guard, who plies her trade in the colour of Al Ahly in the Egyptian League, has indeed come of age and a lot will be expected of her when her side confront Tunisia in the Quarter-Finals qualifications on Wednesday.

Soraya finished the Group Phase with an average of 16 points, five rebounds, 3.5 assists and three steals.

Spain-based Mali center, Mariam Coulibaly has become a minister of defense of sort for her country going forward in the FIBA Women’s AfroBasket with automatic qualifications to the Quarter-Finals after finishing top of Group D.

At 23, young Coulibaly is not scared of taking all the blows thrown at her in her bid to help her country wade of any threat at both end of the court.

Standing at 1.92m (6ft 2in), the IDK Eustokren of Spain center, Coulibaly rounded up the Group Phase with 13 points, nine rebounds and one assist as her country await their Quarter-Finals opponent.