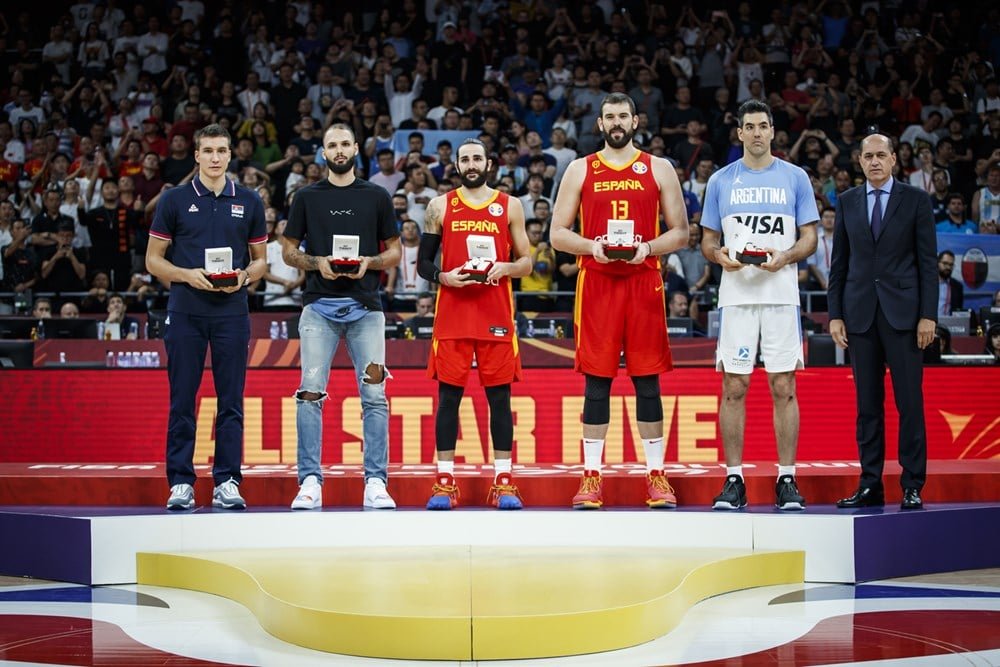 BEIJING (China) – Playing the best basketball of his career earned Ricky Rubio the TISSOT Most Valuable Player award at the FIBA Basketball World Cup 2019, with the Spain point guard headlining the All-Star Five.

Rubio led Spain to their second World Cup title, averaging 16.4 points, 6.0 assists, 4.6 rebounds and 1.5 steals per game, and shining his brightest in the Final Phase of the competition, collecting 19 points, 12 assists, 7 rebounds and 4 steals in a double overtime thriller to take down Australia in the Semi-Finals and putting up 20 points against Argentina in the title clash.

Rubio joins Pau Gasol as only the second Spanish player to win the MVP award in this event.

Gasol did it in 2006, continuing the run of active NBA players winning the individual trophy, which was started by Dirk Nowitzki in 2002, and also recently saw Kevin Durant and Kyrie Irving get the nod in 2010 and 2014, respectively.

Argentina’s Luis Scola was probably the best feel-good story of the entire event, winning the world over again on the brink of his 40th birthday. He was selected to the All-Star Five after leading his team to their second runner-up finish, and the first one since 2002. Scola averaged 17.9 points and 8.1 rebounds per game.

Serbia’s Bogdan Bogdanovic finished with 183 points in eight games, the most total points among all players in China. Bogdanovic averaged 22.9 points on 55.6 shooting from the field and 53.0 from three-point range, adding 4.4 assists and 4.1 rebounds to the mix to take Serbia to fifth spot.

France finished on the World Cup podium for the second time in a row, in large part due to Evan Fournier looking unstoppable for most of the event. Fournier averaged 19.8 points, 3.8 rebounds and 3.0 assists per contest to book his spot among the All-Star Five.