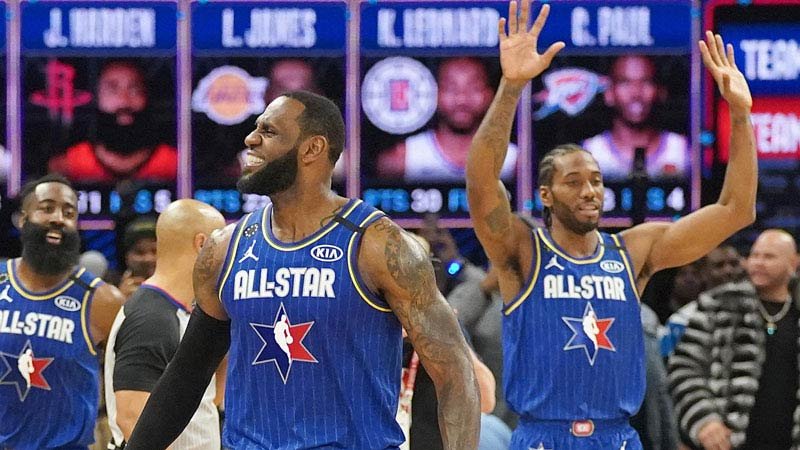 The 69th All-Star Game was won Sunday in Chicago by the team of LeBron James (157-155) at the end of a breathtaking end of the match, with an unusual intensity, a beautiful tribute to Kobe Bryant, whose shadow hovered over this gala weekend.

Even if his game, very defensive, did not necessarily predispose him to shine, the French Rudy Gobert, whose it was the first selection, did better than appear in this match of the stars, finishing with 21 points and 11 rebounds.

To celebrate the memory of Kobe Bryant, who died tragically on January 26, the NBA had made several changes, including a new match format.

Convoluted in appearance, with a score to reach at the end of the meeting, this formula was ultimately the key to the success of this edition.

Because after the first two one-way quarters, one for the team of LeBron James (53-41), Team LeBron, and the other for that of Giannis Antetokounmpo (51-30), Team Giannis, the meeting has changed its face.

As the outcome approached, the two selections moved away from the canons of a classic All-Star Game, usually entirely dedicated to the attack, sometimes even to nausea.

After a third quarter ended in a tie (41-41), the last period gave rise to very rare scenes in a gala match.

Against, passing in force, fouls, messes thrown passionate disputes with the referees, neither of the two selections of All-Stars, the best players in the professional league of North American basketball, wanted to yield.

At stake, the victory, but also the tribute to Kobe Bryant, as well as an envelope of $ 300,000 offered by the NBA to the charity chosen by the winning team.

Despite a 9-point advantage at the start of the fourth quarter, Team Giannis was caught and then overtaken by Team LeBron, very concerned in defense.

Author of 30 points in only 20 minutes of play, Los Angeles winger Clippers Kawhi Leonard (Team LeBron) received the trophy for best player of the match, which is now named Kobe Bryant.

The award could have gone to Rudy Gobert (Team Giannis), who was one of four players nominated for voting by fans and journalists (who elect the best player of the match) a few minutes before the final whistle.

Known for his defense and his dedication to the collective, the French pivot of Utah Jazz knew how to get into the rhythm of the match and take advantage of the passes of his teammates near the basket to register no less than 8 dunks.

Gobert could have done better if he had not been kept on the bench for the entire last quarter, dedicated to the holders.