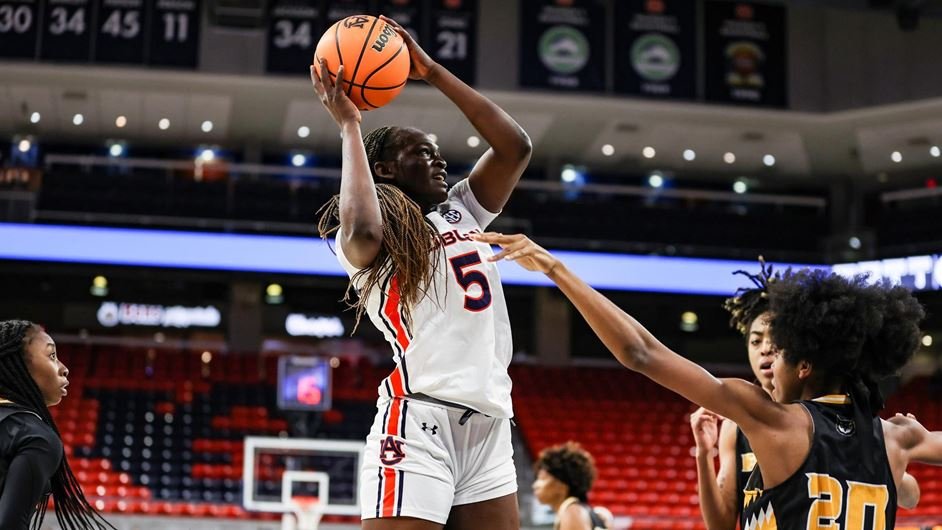 AUBURN, Ala. – Aicha Coulibaly picked up her second double-double of the season to lead three Tigers in double figures as Auburn defeated Kennesaw State 66-54 Monday afternoon to wrap up non-conference play.

The Tigers (8-3) will carry a six-game winning streak into the holiday break and the start of SEC play after a strong defensive effort through most of three quarters helped Auburn build a big lead.

“I’m proud of my team for pulling out the victory,” Auburn head coach Johnnie Harris said. “I thought we started out really well, we started out attacking their press. We wanted to attack it and get layups. I thought we got a little comfortable toward the end, that’s something we’ll work on. We started taking shots quick instead of letting the offense work for us, and they made a little run. Overall, I’m happy with the victory.”

Kennesaw State (4-7) rallied late and cut a 26-point deficit to single digits, but five straight points from Jala Jordan and a dagger 3-pointer from Annie Hughes put the game out of reach.

“We were just turning the ball over, not being patient and taking bad shots,” Harris said of the fourth quarter. “But I did think we came back once we settled down late in the fourth quarter and finished it out. It was unforced turnovers, just making bad plays, going away from the game plan.”

Coulibaly finished with 23 points and 11 rebounds, her fifth time in the last six games to top the 20-point mark. She also had three assists and a pair of steals along with knocking down a 3-pointer.

Jordan had her second straight big performance with 17 points and six rebounds off the bench; she also went 5-6 at the free-throw line on a day when Auburn struggled at the stripe. Sania Wells came back after missing Saturday’s game with Grambling to post an 11-point, three-steal day.

Annie Hughes posted a career-high seven steals along with six points, and Kiyae’ White had seven points and five rebounds. Mar’Shaun Bostic put together a solid day as well with four assists and no turnovers in 20 minutes off the bench.

Auburn started hot from the floor and finished at 43.9 percent (25-57). It was a tough free-throw shooting day for the Tigers with a season-low 52.4 percent (11-21), but the Tigers forced KSU into 20 turnovers, converting those into 19 points. The Tigers took good care of the basketball through three quarters with just three turnovers in that stretch, but Kennesaw made their fourth-quarter run courtesy of eight Auburn giveaways that turned into 13 Owl points.

Strong defense from the Tigers helped them turn a 21-13 first-quarter lead into 32-17 halftime advantage, the second-fewest points by an Auburn opponent in a half this year. Auburn then exploded out of the gate in the third quarter, going on a 15-2 run at one point to take its largest lead at 47-21 with 5:07 to play, forcing a Kennesaw timeout.

Things began to turn shortly thereafter, though, as the Owls would cut the deficit to 18 points at 52-34 after three. Kennesaw would open the fourth quarter on a 15-3 run to cut what had been a 26-point lead down to as little as six with 4:19 to play. But Jordan took over in the paint over the next two minutes, putting Auburn back up by 12 on a reverse layup that drew a foul with 2:23 to play. The Owls would get no closer.

Alexis Poole led the Owls with 20 points, and Amani Johnson recorded her first double-double of the season with 15 points and 11 rebounds.

Auburn will break for the holidays before returning to action in Southeastern Conference play. The Tigers will host Kentucky on Dec. 30 at Auburn Arena; game time is 7 p.m. CT. Tickets are available at AUBTix.com.