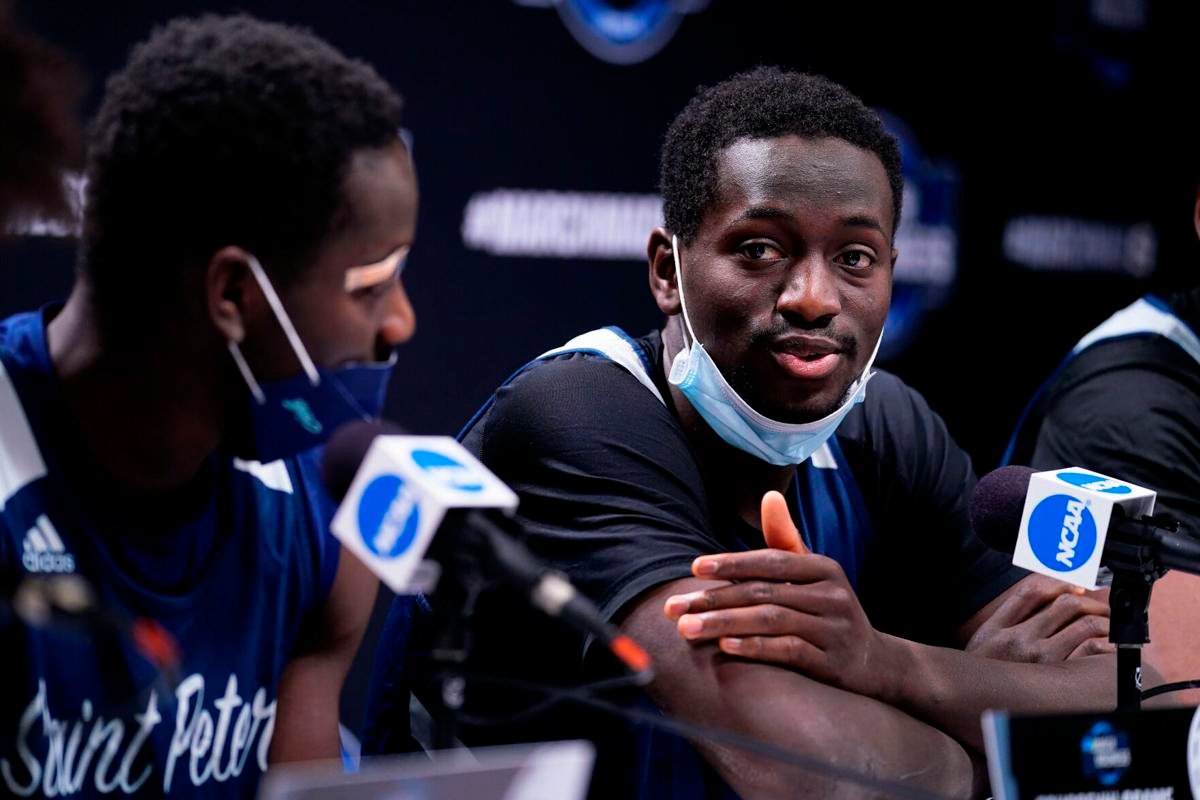 A month into the Fran Dunphy tenure at La Salle, the Explorers finally got some good news on the roster front.

According to national grassroots expert Andrew Slater, Dunphy and his staff have secured commitments from Saint Peter’s transfers and twin forward Fousseyni and Hassan Drame, two key pieces from the Peacocks’ history-making Cinderella run this March.

The Drame twins have both played three seasons at SPU, but due to the NCAA’s blanket waiver on the 2020-21 COVID season and new transfer regulations, they should both be immediately eligible with two years left to play. The pair of 6-foot-7 forwards, who graduated from Our Savior New American (N.Y.), both hail from Mali, where they led their country to a championship game appearance in the FIBA U19 Basketball World Cup in 2019.

Hassan Drame (above) and his brother Fousseyni are headed to La Salle, according to a report. (Photo: Mark Jordan/CoBL)

This past season, Hassan Drame started 25 of 34 games for Saint Peter’s, averaging 6.0 ppg and 5.3 rpg while shooting exactly 50% from the floor. Fousseyni, who played more minutes (22.7 to 21.3) despite starting fewer games (nine of 33), averaged 7.0 ppg and 6.4 rpg. The pair certainly showed their value during the Peacock’s captivating run to the Elite 8, becoming the first No. 15 seed to win a game in the second weekend of the NCAA Division I Men’s Basketball Tournament.

During the Sweet 16 win over Purdue at the Wells Fargo Center in South Philly, Hassan scored seven points in 24 minutes of action; Fousseyni scored five in 22 minutes off the bench, the two playing superb defense on a Purdue squad that was bigger than them at every position across the court.

Now they’ll be joining an Explorers program that, under Dunphy, is trying to build out of the Atlantic 10 basement. Dunphy, the 73-year-old La Salle alum who previously guided Penn (1989-2006) and Temple (2006-19) to a combined 17 NCAA Tournament appearances, has to rebuild a roster that almost entirely departed following the removal of Ashley Howard this spring after the former Villanova assistant was unable to make much progress in his four years. The Drame twins are the first two pieces to commit to the Explorers since Dunphy’s arrival, and they’re a much-needed boost of momentum for a team that before their decision had just four remaining scholarship players.

It’s certainly not an easy place to win, with facilities and fan support that ranks amongst the worst in the Atlantic 10. The underdog mentality the Drame twins developed at Saint Peter’s should play right into what Dunphy’s hoping to install at his third Big 5 program.

“Like we always say, before going into a game, we don’t see high [major], we don’t see talent,” Hassan said after the Purdue win.

“I just always see basketball as just hope,” Fousseyni added. “Just play basketball, and like he said, we don’t really know those names. All we see is a player.”