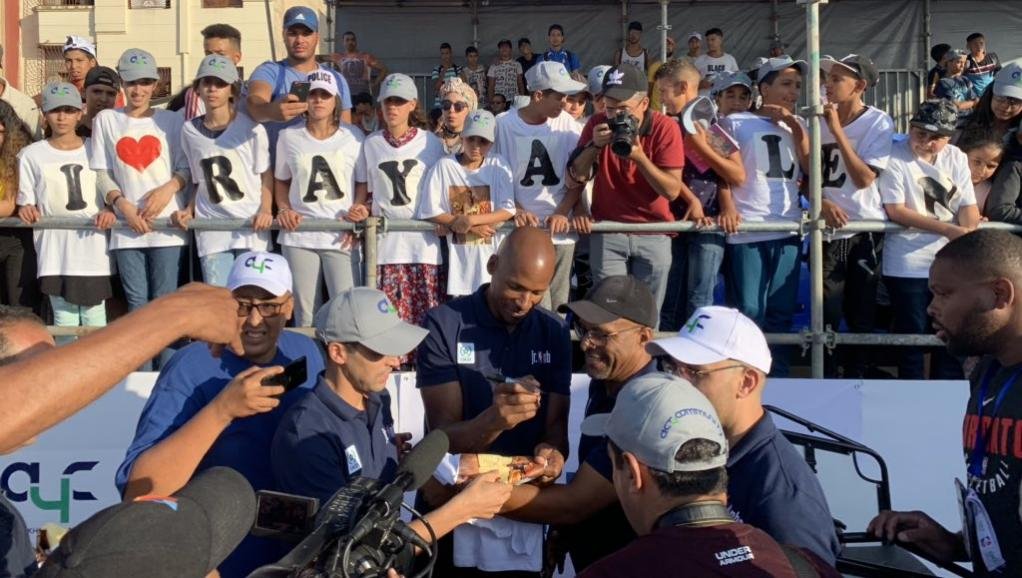 Ray Allen is in Morocco for the inauguration of a basketball court built in Khouribga and the launch of a Junior NBA League, as part of a partnership between the NBA and OCP, a Moroccan company specialized in extraction and exploitation of phosphates. For rfi.fr, the former great American star evokes this very first trip to Africa and African basketball.

RFI: Ray Allen, why are you here in Morocco?

Ray Allen: There has always been a good base of basketball players in Africa. In addition, the NBA has just launched a new competition on the continent [Basketball Africa League, Editor’s note]. And then there are so many African players in the NBA right now. That’s why I came here to participate in a NBA Junior program. I think it’s my mission as a league veteran to help young people discover this game around the world.

There are so many great athletes from Africa. Building infrastructure here is important. […] Basketball is such a simple game. We can play five against five, one against one, alone … Throughout the United States, you will find a basketball hoop. There are lots of things around the corner, in the schools. It’s implanted everywhere.

It is very important that children learn basketball fundamentals when they are very young. The more you understand and master the rules and basics, the more you like this game quickly.

And so you will inaugurate basketball courts in Khouribga in particular, as part of a partnership.

[…] I played 18 years in the NBA. As a player, I learned that you do not do everything yourself. […] An NBA team in the United States is a real community, resources. This situation makes it possible to be in contact with so many people … However, compared to the construction of these infrastructures, here in Africa, we have the great pleasure to have a partnership with OCP, which is one of the largest companies of the phosphate industry. Working with them allows us to start filling a void. Developing this type of partnership in North Africa but also on the rest of the continent, this will allow us to become a true leader in Africa.

Is this your first time in Morocco?

This is my first time in Africa! I’ve been waiting for that for a long time! I have seen so many films taking place on this continent and I have heard so many stories about it. There seems to be so much diversity here. […] I hope this is just the beginning of my travels in Africa. […]

Which countries would you like to visit in Africa?

There are so many … My wife is Cape Verdean, so I would like to go to Cape Verde. I would like to visit Egypt which is obviously a must. I am also looking forward to going to South Africa. I heard it was an amazing country, beautiful and great people. I would also like to go on a safari in Tanzania because a relative told me it’s a great experience. There is also West Africa, with countries like Sierra Leone, Ivory Coast … It’s hard to focus on a country as there seems to be a lot of exceptional places to visit. So, I am happy to be in Morocco and to be able to say that I have finally been in Africa. I would also like to go to Kenya, Rwanda, Mozambique … There are so many languages ​​and cultures to discover. […]

To return to sport, what do you think of African basketball?

African basketball is very young. It is still at an early stage, if we think in terms of infrastructure and we compare it to the Euroleague, the NBA obviously or even China and the Philippines which I could discover the leagues.

The important thing people need to understand about Africa is that great talent comes from this continent. In the NBA, there are thirteen players born in Africa, it seems to me. […] There is a pool that has not yet been fully exploited. So building infrastructure will be a great opportunity for children in these countries.

And then, it benefits the NBA and the Euroleague. Because there are already many African players who are able to leave their country to become professional basketball players elsewhere, and while representing their nation at the Olympics.

The NBA and the International Basketball Federation (FIBA) are launching a new competition, the Basketball Africa League. What do you think ?

This is a catch-up, considering that the Euroleague, the Chinese league, the Philippine league, the leagues in South America have long existed … This continent is huge and full of great athletes. I know football is very strongly rooted in Africa, in the hearts and minds of people. But basketball, with resources and a well-used network, could be one of the greatest resources for young people on this continent.

This sport is so easy to play … Anyone can do it. You do not have to be huge. Of course, it helps. But there is a whole range of players: big, fast, shooters. There are so many features that can count to be a good basketball player! So I think there are a lot of great athletes in Africa and if given the opportunity, they will excel in basketball.

RAY ALLEN, ONE OF THE MOST BEAUTIFUL TRICKS OF BASKETBALL HISTORY
Ray Allen played in the North American Basketball League (NBA) from 1996 to 2014. In 18 years, he has worn the colors of four teams (Milwaukee Bucks, Seattle Supersonics, Boston Celtics and Heat). Miami) and won two NBA titles (2008 and 2013). He has been selected ten times for the All Star Game, the gala match that brings together every year the best players in the championship. If he is not considered the best rear of his generation – he arrived in the NBA at the same time as Kobe Bryant, Allen Iverson, Steve Nash … – he is however the best shooter of his generation. He is the player who scored the most 3-point baskets in NBA history.

Ray Allen, who also won the gold medal at the 2000 Olympics with Team USA, is also known for his role as a young basketball prodigy in Spike Lee’s film He Got Game, where he plays alongside actor Denzel Washington.