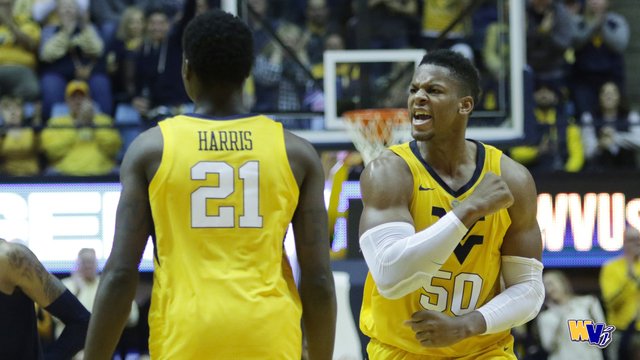 CHARLESTON, W.Va. – Sagaba Konate’s decision to pursue the NBA Draft seems more like a formality than a surprise, but based on new NCAA rules, the star shot blocker could still have a path back to Morgantown to play out his final year of eligibility.

WVU men’s basketball released a statement Monday saying Konate has declared for the 2019 NBA Draft, and that he plans to hire an agent. In the end, Huggins said it was a “family decision” for Konate.

“I think the final counsel, after looking at all the facts, should come to the family, and the family ought to make the decision,” Huggins said Monday before the Mountaineer Athletic Club Charleston Scholarship Dinner. “We’re here to provide the most accurate information we can possibly provide and to encourage them to do what’s in their best interest.”

Konate considered the draft last year and participated in the NBA Draft Combine. He later returned to WVU for his junior season, which was limited by a knee injury. Still, Konate locked up the program’s all-time blocks record before again declaring for the draft.

But according to new NCAA rules, Konate’s draft decision does not automatically disqualify him from his final year of eligibility.

Konate could choose to hire a certified agent, keeping the door open for a possible return to WVU. He could then drop out of the draft field before a May 29 deadline — about a week and a half after the NBA Draft Combine.

Even if he continues to pursue the draft after that deadline, Konate could still retain his eligibility if he goes undrafted and subsequently cuts ties with his agent.

While the new NCAA rules serve as a safety net for draft prospects, Huggins said they could potentially harm college teams in the way that they impact recruiting.

“I understand what they’re doing. I understand they’re trying to give guys more time to make the right decision and all that,” said Huggins. “My problem is, do they care about the other 12?”

Huggins argues that if a team is forced to wait until June to learn the status of a star player, it could be left with a major hole in its lineup. High school recruits and transfers are making their decisions now, and the best ones won’t be available after the draft.

“So now you’ve got 12 guys who just lost their best player, probably — if he’s going to the draft, he’s probably their best player — so they’ve just lost their best player, and they can’t replace him. That’s not fair to them,” said Huggins. “Those guys wanna win. They wanna go to the NCAA Tournament. They wanna keep advancing in the NCAA Tournament. What happened to them? That’s not fair to them. To me, and I guess I’m different, I don’t think you sacrifice 12 people for one, and that’s what we’re doing.”

Huggins thinks a more firm deadline for a draft prospect’s final decision on his future could benefit teams. Even though a May 29 deadline currently set in place, the new rule for undrafted players can complicate things.

“My thing is, let’s have a drop-dead date. And it can’t be as late as it is, because now, there’s nobody left out there,” said Huggins.

Konate is expected to accept an invitation to the 2019 NBA Draft Combine, which begins May 15 in Chicago.