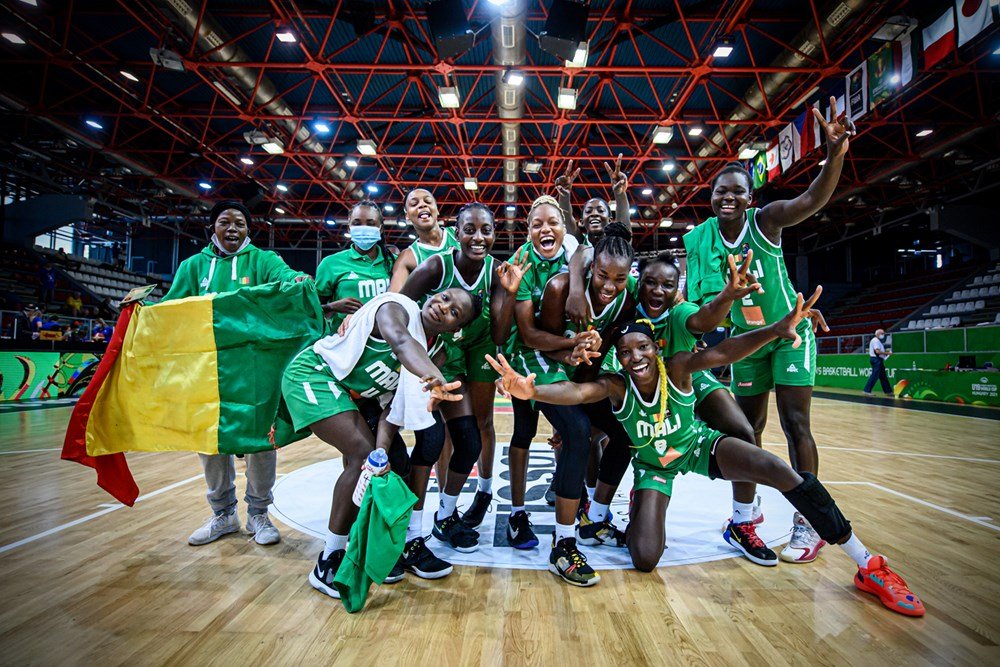 DEBRECEN  (Hungary) – The FIBA U19 Women’s Basketball World Cup is moving into crunch time and so ahead of the Quarter-Finals, here’s a special edition of Power Rankings.

Taking into account what has went down so far in the Group Phase and the Round of 16, plus the all-important tournament bracket, this is how they’re stacking up.

Red-hot favorites for the title long before the plane wheels touched down on Hungarian soil, the defending champions have justified their billing in a big way. Champions elect, it would take a huge upset for them to be denied yet another title. Led by Caitlin Clark who is surely eyeing up MVP honors already, plus some nice contributions from the likes of towering center Lauren Betts, plus Sonia Citron and Jewel Spear, USA are too deep and too good for anybody. It’s their title to lose and it would be an epic upset if they did not take gold.

With Anastasiia Kosu to lead the way, Russia were always hoping to challenge for the podium and so far, so good. Having someone that has played in EuroLeague Women and the Russian Premier League regularly, means they have a true marquee player and centerpiece. Her massive double-doubles have underpinned the challenge and the only fly in the ointment could be a physical Mali team who lies in their path and may have enough to stifle Kosu in her tracks. Still, Russia are not a one-player team and they do things collectively such as gang rebound nicely. Much will hinge on whether the supporting cast can continue to play well, with Kristina Savkovich and Ekaterina Koshechkina particularly important in that equation. As is collectively looking after the ball more carefully.

Aside from an anticipated loss to USA in the Group Phase, the Gems have been solid so far and may benefit within their bracket by France being unexpectedly eliminated from medal contention. It certainly increases the prospects of a podium place again. They still need to perhaps shoot the ball slightly better in these last games to wrap up a medal, while Jade Melbourne has impressed and the passing of Millie Prior has also caught the eye. However in reality, it has been the teamwork that has been most important and that will be essential against an unpredictable Canada in the Quarter-Finals.

The locals in Debrecen would love Hungary to make a deep run and so far at least, they have a shot at making the Semi-Finals and, who knows maybe a medal? While we have them slated to finish in fourth spot, they are capable of still getting a podium step. The main thing in their favour is that they have shot the ball very well so far and especially from outside. This is in turn, creating some space inside to exploit as teams start chasing them off the line. Reka Dombai was always tasked with leading her country and so far she is delivering. Eszter Madar and Julia Boros have also caught the eye too.

If one nation has made everybody sit up and take notice, it’s s surely Mali – even if they did have to forfeit their first game against Czech Republic. Despite three straight wins since their arrival, they  may find life tougher against Russia in the Semi-Finals, but can also still fancy their chances of making the last four of the competition. Powerful, athletic, talented and smarter on the court than most teams that have flown the flag for Africa previously, are they the best that have come from the Continent to have played at the event? It’s a pertinent question. Much of their success has been due to many players having stepped out at the previous edition in Bangkok two years ago. While the way they dismantled a proud and estabished nation like Canada was so ruthless. Sika Kone is again showing why she is one of the best of her generation and can take Mali to glory at senior level and certainly a future Olympics, with Aminata Sangare a perfect partner in the paint and similarly impressive. So yes, they are 5th, but don’t be surprised if they did take down Russia and land Mali’s first ever medal.

Czech Republic are something of a rarity in this competition in that most games have been relatively close either way. It is a pity we never got to see them against Mali in the first scheduled game when they benefitted from the African side having to forfeit. They have every chance of believing they can advance to the last four as the Quarter-Finals clash against Hungary is still one they can win – not least because they have such a talented core with  Dominika Paurova and Petra Malikova in particular having been two of the most impressive performers in the competition so far.

What an absolute roller-coaster it has been for Canada with a loss to Japan and also to Mali when they were ripped apart completely and lost by an eye-watering 26 points. But to their credit, they showed immense heart to bounce back from that and cause a giant Round of 16 upset by beating medal contenders France. There is no way of showing what Canada team will now show up for each subsequent game but what a difference 24 hours can make! Yvonne Ejim is an MVP contender and Shayeann Day Wilson and Tara Wallack have also been key to Canada getting this far.

Yes, we know – much lower down in the rankings than some of you might agree with, but the cold hard facts for Spain are that they have found themselves up against USA in the Quarter-Finals and therefore have less chance than anyone to make the last four of the tournament because their opponents are so dominant. So miuch hinged on that vital group game against France when they were pipped by their neighbors. The good sign is that they have shared out the scoring to such an extent that no single player is even averaging single digits. But maybe the bad news is that unlike every other edition or at U17, they have lacked the one or two class players and standouts for the biggest moments. The 2004 born Elena Buenavida Estevez has shonw enough to suggest that she will be a big leader when she is eligble to return in 2023.

Always likely to challenge for a medal, France had been impressive, picking up a win against Spain and looking to be on course. Their real asset looked to be depth with the likes of Pauline Astier, Leila Lacan and Louise Bussiere making the team truly tick. Only they absolutely blew it – big time. Facing a Canada side in the Round of 16 who had just been trashed by Mali, they were beaten and not only miss out now on a medal, but also the Quarter-Finals. 9th or beyond is not where France should be. They really did underline why there is no more dangerous day to under-perform than when it is the dreaded Round of 16.

This Italian side has struggled to show its teeth in the tournament and that is despite having three huge talents like Ilaria Panzera, Giulia Natali and Martina Spinelli. It is quite the statement that four games in, all Italy has to show is one win and even that was a bit of a struggle against Egypt. Even if they pick up some wins in the Classification Games, you can file this one already as having underperformed.

With all the attention of Tokyo 2020 and the senior team making that glorious run to the Olympic Final where they took historic silver, there was perhaps some additional attention on Japan in Debrecen to see what might be coming down the pipeline. As a group they competed hard as you would expect, but fell short. Japanese basketball prides itself on shooting prowess normally and the fact is that they didn’t light it up consistently enough to really make a difference, struggling really badly from two-point range. Aika Hirashita showed that she could be a senior option in the future, while Uia Emura also excelled.

A bit like the senior team in past years, scoring is an issue for Korea at this level too. They are not even breaking 50 points per game. That has been in a large part down to the poor three-point shooting of just 22%. The positive is that they claimed a win against Brazil, but there has not been much else to celebrate, with Korea lacking that one outstanding leader they have had in the past such as Ji Su Park or Jihyun Park.

They just can’t find enough offense to challenge at all and they are currently averaging an eye-watering 45.3 points per game – simply not enough to win many games of basketball. They did beat Chinese Taipei which is at least something, but 29 points in the loss against Hungary and 35 against Australia should have the alarm bells ringing back home in terms of youth development and the seemingly growing gap with other nations. The fact Augustina Marin is leading scorer with 7 points per game tells a painful story so far.

This once great basketball nation continues to struggle at all levels results-wise as they look to get back on track after several years in the wilderness. This performance has done little to cheer hearts after starting out with four straight losses, including a huge loss to France, scoring an embarrassing 22 points in the game against Spain and being defeated by Korea. They were at least more competitive in the Round of 16 against Czech Republic but almost 30 turnovers per game is hard to compute. Meanwhile without the impressive Maisa Pereira, it would have been even more bleak.

Four games and four losses (all by double digits) shows that Chinese Taipei have struggled to compete in the competition so far and what has killed them most is their three-point shooting, since their ethos is around their quickness and ability to shoot from downtown.Without any power or size, they have also struggled on the glass and when you are missing too many shots, that is a double whammy. Chih Ying Chen has done her best with Hung Ting Kuo to inspire, but a chronic lack of depth and options has been exposed.

Light years behind fellow African participants Mali, it has been something of a predictable struggle for Egypt who were not helped by an awful draw for the Group phase. Pitched against Australia and USA, it was a nightmare, but to their credit, they did compete well against Italy and pushed their opponents hard which is something to be proud of. They also have some ballers with potential and the likes of Salma Ismail, Yara Hussein and Mennatullah Elgharini have shown glimpses of good work.

*The power rankings are entirely subjective and are in no way a true, accurate ranking system. All comments are purely those of the author.

These Power Rankings are put together by our panel, led by FIBA’s women’s basketball specialist Paul Nilsen. He eats, sleeps and breathes female hoops and is incredibly passionate about the promotion of the women’s game at all levels. Paul uses an extensive network of players, coaches, clubs and Federations to shape his work and opinions.