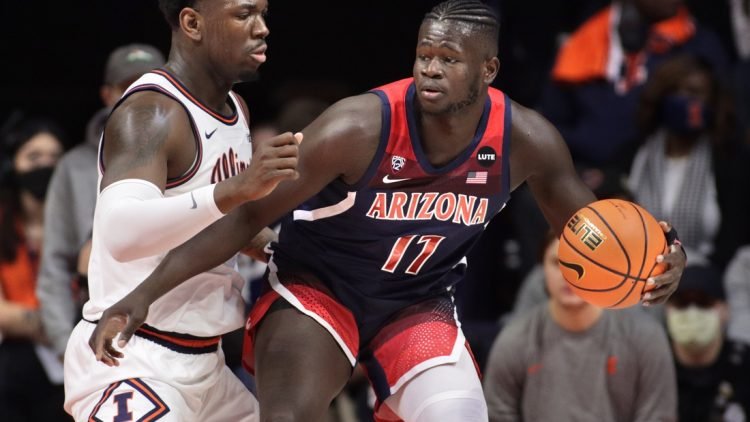 After shooting 55.2% from the free-throw line as a lightly-used redshirt freshman at Gonzaga last season, Oumar Ballo transferred to Arizona and went to work.

“When I first got here, my form was a little bit like that,” Ballo said, cupping both hands off to the right of his head, then pointing to center Christian Koloko as both of the UA centers smiled. “And he used to make fun of it.”

Truth is, Koloko had been there. He shot 35.0% as a freshman in 2019-20, missing two free throws at the end of overtime that allowed Oregon to hang on to a one-point win, and then shot 62.5% last season as a sophomore.

But this season, Koloko is hitting 75.7% from the line and Ballo is at 70.5%, both of them a big part of why UA has become the Pac-12’s third-best free-throw shooting team in conference games — and a reason why the Wildcats still have hope even when making less than a third of their shots from the field as they have in their past two games.

Overall, the Wildcats’ free-throw percentage in conference games of 74.4% is behind only Utah (82.4) and Colorado (75.7) and UA is fourth-best in free throw rate, the ratio of free throws taken to field goals taken that measures a team’s ability to get to the line.

Individually, Koloko and Ballo are frequent visitors to the line relative to their time on the court. Ballo picks up 6.5 fouls per 40 minutes while Koloko draws an average of 4.7.

Once there, Ballo relies on lessons he says he learned over the summer from UA assistant coach Riccardo Fois, a former Gonzaga staffer who worked in player development for the Phoenix Suns last season.

Ballo said Fois told him to shoot higher and and in front of his head “so it just goes up and it’s smooth,” but the big man from Mali was skeptical at first.

“It was frustrating because in the beginning it was not going in,” Ballo said. “I was like `I don’t know if this is gonna work.’ But I stuck with it and it finally worked out.”

Ballo (6 of 9) and Koloko (6 of 7) combined for 12 points from the line on Saturday in UA’s 67-56 win over ASU, part of what became a critical foul advantage for the Wildcats. UA shot 26 of 32 free throws against the Sun Devils, while ASU took just 15 and hit eight of them.

The difference of scoring 18 more points at the line helped allow the Wildcats to easily overcome their 32.2% field-goal shooting against the Sun Devils.

UA’s free-throw edge was especially notable in the first half: The Wildcats shot just 24.4% from the field, missed all 13 3-pointers they took … and yet were tied 32-32 at halftime in large part because they hit 18 of 21 free throws.

“It was a choppy game,” Lloyd said. “We were being physical inside and guys were posting up hard or driving to the basket. (Free throws) just kept us in the game. We were ice cold and to be able to go in at half tied when you shoot in the 20s is a positive thing.”

While Lloyd says there are still times that Ballo will shoot a free throw that could use a “little more arc on it,” he praised Ballo for recent efforts that the Wildcats sorely needed.

“Oumar’s worked really hard and obviously, he’s kind of become an anchor of what we’re doing right now,” Lloyd said. “He deserves a ton of credit. He’s put together four games in a row of playing at a high level and we need that out of him right now. We’re not quite at 100% physically, so his growth has been really important for us.”