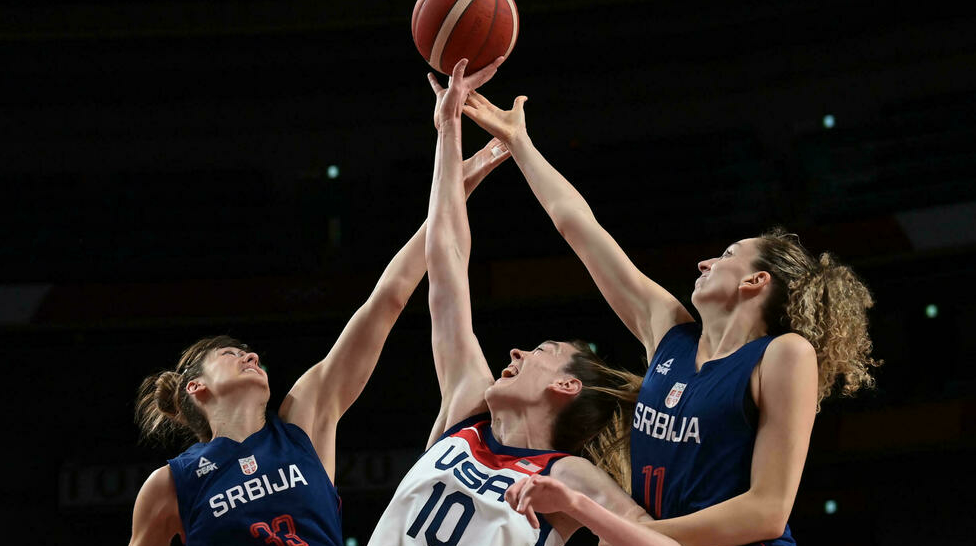 Breanna Stewart of the United States in the fight for a possession with Serbs Tina Krajisnik and Aleksandra Crvendakic (# 11) at the Tokyo Games on April 6, 2021

The American basketball players, in search of a seventh Olympic coronation in a row at the Tokyo Games, easily qualified for the final, beating the Serbs (79-59) on Friday at the Saitama Super Arena.

Team USA will face France or Japan on Sunday morning (11:30 am local, 4:30 am French), opposed in the evening in the other semi-final, in an attempt to add a ninth medal to its record.

As usual, the Americans started their game with a bang, creating an almost crippling gap (25-12) at the end of the first quarter.

And as usual, it was their insides that did the most damage, Breanna Stewart (12 pts, 10 rebounds) and Britney Griner (15 pts, 12 rebounds).

The latter and Diana Taurasi, respectively 39 and 40 years old, would go down in the history of Olympism if successful Sunday.

Because few are those who have won at least one title in five different editions (the British rower Steve Redgrave, the German kayaker Birgit Fischer, the Hungarian fencers Pal Kovacs, Aladar Gerevich and Italian Valentina Vezzali, and the German riders Reiner Klimke and Isabell Werth).