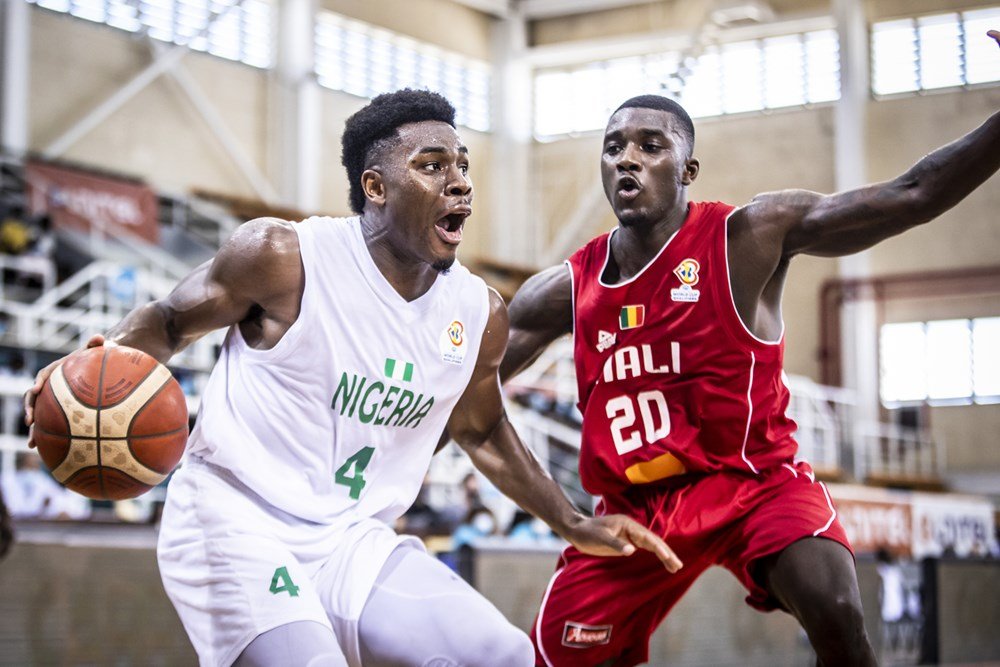 BENGUELA (Angola) – Nigeria were on the verge of going down 0-2 in the FIBA Basketball World Cup 2023 African Qualifiers on Saturday when Jordan Ogundiran and Chris Obekpa stepped up to rescue the former African champions.

A day after losing to Cape Verde in the opener of Group A, Nigeria looked helpless for most of the contest, allowing Mali to embark on 12-point lead at some point.

Nigeria head coach Julius Nwosu later said that his team never panicked as he knew that they had Nigerian basketball’s prestige to protect.

Ogundiran and Co seem to have shared Nwosu’s view and in the waning moments of the game Nigeria improved to 1-1 by beating Mali 72-70.

Ogundiran, who missed the first game and could only join the team hours before the game, was 5-of-10 from shooting to contribute a joint team-high 19 points off the bench.

Ike Diogu, who spent 36:49 minutes on the floor,  sank four of his six three-point attempts to finish with 19 points and Ben Uzoh, the other Nigerian to score in double figures, finished with 11 points and added a game-high seven assists.

Ibrahima Sidibe was 8-for-11 from shooting en route to a team-best 17 points, but Mali dropped to  1-1 before taking on Cape Verde on Sunday.

TURNING POINT: Jordan Ogundiran had a four-point play with 38 seconds that put Nigeria ahead (72-70). Mali called a time-out, ran the shot clock, and as N’faly Kanouté’s drove to the basket [and maybe trying to force a foul], Chris Obekpa stood still to swat Mali’s attempt to change the course of the game.

GAME HERO: No doubt that Ogundiran and Obekpa played a huge role in the win and rescued Nigeria from another defeat, but Ike Diogu’s leadership and experience, when it mattered most, proved vital for D’Tigers.

STATS DON’T LIE: Mali may have recorded a decent field-goal performance (41.5%), but finishing 10-of-17 from the free-throw line has proven costly.

With Mali making only 6-of-25 three-pointer, and with leading scorer Ibrahim Djambo limited to just five points in 30:18 minutes things looked untenable for Mali.

BOTTOM LINE: A defeat against Mali would have made alarm bells to ring loud back in Nigeria as it would have been D’Tigers’ fourth straight defeat dating back to the AfroBasket 2021. But Julius Nwosu’s team kept their composure to keep their World Cup African Qualifiers’ campaign on the right track.

THEY SAID: [Julius Nwosu, head coach of Nigeria] – Our team’s plan is to stay focused and prepared for the remainder of the African Qualifiers.

“It’s a great feeling [to have first win as head coach of Nigeria].”

[Nigerian guard Jordan Ogundiran]: “It’s a privilege to play with him [Ike Diogu]. He’s a respected guy across the continent, and he and Ben [Uzoh] are always welcoming to new members of the team.

[Mali guard Ibrahima Lamine Sidibe]: “It’s always tough to lose like this. I’m proud of my teammates. I don’t want to blame anyone but I think we gave them the game. We gave them the game. We were in front and if we had controlled better the end of the game it would have been different. Nigeria played good. It’s a good team and I respect them.”