”We’ll try to do everything in our power to make the Basketball Africa League a reality this year,” says FIBA Africa President Manave

MAPUTO – By now eight African clubs would be gearing up for the Final Phase of the inaugural Basketball Africa League (BAL), but the COVID-19 pandemic came and the highly-anticipated competition’s regular season is yet to take off.

No one expected anything to be able to disrupt what most believe would be a game-changing event for African basketball, but two weeks before the start of the regular season, BAL – a partnership between FIBA and the National Basketball Association – announced its postponement due to the coronavirus pandemic.

BAL’s regular season was due to run from March to May across six African countries with the Final Four scheduled for June in the Rwandan capital Kigali.

The following statement has been issued: pic.twitter.com/EUGEaYCBcP

FIBA Africa President Anibal Manave, who also serves as President of the Board for the BAL, tells FIBA.basketball that it’s still possible to organise the league this year.

FIBA.basketball: Obviously, postponing the start of the inaugural BAL season comes as a setback for this ambitious African basketball initiative. Can BAL become a reality this year?

Anibal Manave (AM): As an organisation, we are currently facing a very complicated situation. Nobody can predict the future, and we depend on the World Health Organisation (WHO) and Health Authorities’ guidelines. But, it’s worth noting that some [African] countries begin to relax their lockdown measures, which is a good sign for making the BAL a reality this year.

FIBA.basketball: What makes you so confident about the organisation of the BAL this year, even with the current COVID-19 situation affecting the twelve countries from where this year’s BAL’s regular season teams come from?

AM: What we have to do is to resume the BAL project in the next few months, maybe in September. Some say that the COVID-19 pandemic could reach its peak in Africa in September, but there’s no evidence of that, and the good news is that most countries continue fighting this pandemic. Our hope is that the BAL’s first edition takes place in 2020. It’s important to give all stakeholders involved a sign of confidence. That includes clubs, local federations, sponsors, and public. And the best way to give them confidence is by starting the competition.

FIBA.basketball: If the BAL is to happen this year, there might be an overload of competitions in Africa given that the second qualification window for the FIBA AfroBasket 2021 is due to take place in November.

AM: We are monitoring some African countries’ decisions to see what kind of BAL format we are going to implement. We have three scenarios: One: We keep BAL’s original format (regular season across six countries and the Final Phase in Rwanda); Two: BAL to be played in two countries with Nile Conference taking place in one county and Sahara Conference taking place in another country. The top four teams from each group advance to  the Final Phase in Rwanda; Three: This year’s BAL is played in one country over the course of two weeks, including the Final Phase. We are working to find the best way out of this situation.

FIBA.basketball: What, if any, has been the clubs’ reaction to the current climate?

AM: It’s important to mention that all 12 BAL teams have made significant investments, which shows that those teams understood and committed to the BAL project. As an example, Ferroviario de Maputo have signed four foreign players of good quality for a single season. This has never happened before in the clubs’ long history. They’ve shown tremendous interest in participating in the inaugural BAL, and that’s one of the reasons we have to give teams a chance to make history as the BAL’s first-timers . We’ll try to do everything in our power to make the Basketball Africa League a reality this year. We don’t want to cancel it.
These teams should continue to believe in the BAL project. This is not an easy situation for us  and sponsors to be in because there was some expectation around the BAL, but this was an unpredicted situation. We hope to continue working with our sponsors.

FIBA.basketball: What if no solution is found for the organisation of BAL’s regular season in the next few months?

AM: If we don’t organise this year’s BAL it could cause a real damage to the clubs finances. Nobody want this to happen. The twelve teams and their respective countries continue to reaffirm their interest in the BAL this year. Obviously we want it to happen, but we want to safeguard the wellbeing of everybody. If the BAL becomes impossible this year, then certainly we are going to have to make decision for next year.

FIBA.basketball: There is no doubt that the Basketball Africa League is a huge initiative to boost basketball on the continent. What’s your long term vision for the game in Africa?

AM: The BAL is a good way to develop basketball in Africa, and it could propel Africa national teams at world stage competitions (World Cup and Olympics). The BAL is a great way to give our players exposure to a worldwide audience. We are aware that the previous format of African clubs competitions was obsolete. We had calls for FIBA Africa to make adjustments to its format, and this facilitated our decision to embrace and go ahead with the BAL. We needed a competition that could run for three to four months [unlike the old one-week competition]. We had been thinking about this project for a long time.

FIBA.basketball: Can you name one main reason that hindered the game of basketball in Africa over the past few years?

AM: The biggest problem in African basketball has been lack of competition. With the exception of one or another, most African countries have a deficit of basketball competition not only nationally but also at international level. How can you have a competitive national team if their home-based players lack competition domestically? Hopefully, things will be different moving forward. The BAL is an integrated project. When you develop clubs, your national teams become better. One of our objectives is to see, in eight years time, African national teams competing for a medal in the World Cup and the Olympics. 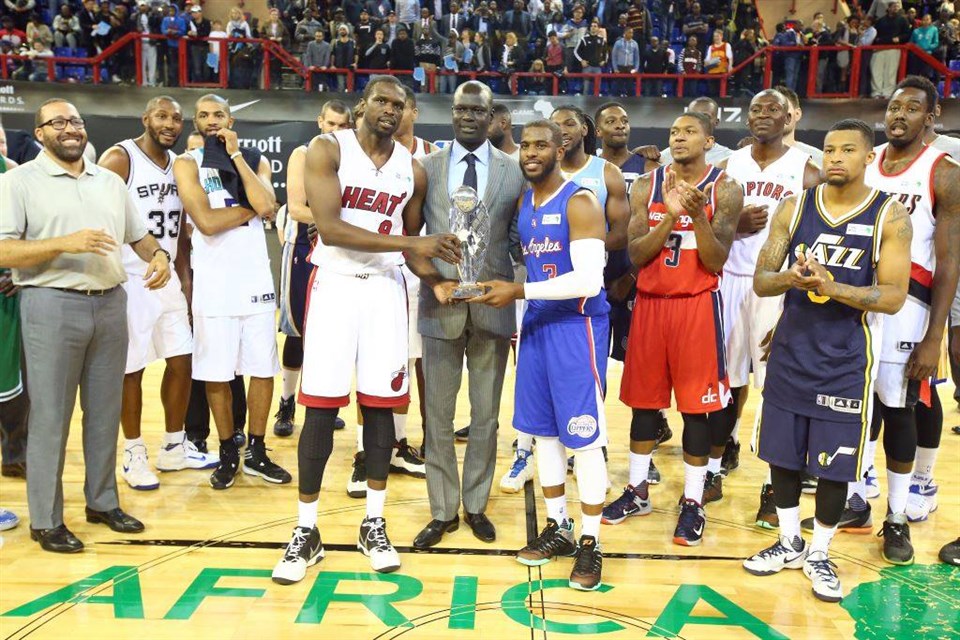 FIBA.basketball: But the lack of competition affects the game at all levels.

AM: Absolutely. Take the referees case as an example. Most of African referees officiate no more than two games at world stage competitions, and, in my opinion, that has to do with the lack of regular competition in their respective countries. The BAL draws a new landscape to help basketball in Africa. Our objective is to develop clubs not only at national level but also at international level also.

FIBA.basketball: Can you give us an overview of FIBA’s partnership with the NBA in the BAL process?

AM: The NBA is the ideal partner for this project. They embraced our ideas and together we are going to do everything in our power to make the BAL happen this year.

FIBA.basketball: Will BAL games be played under NBA or FIBA Basketball rules ?

AM: Our partnership with the NBA is an operational one. BAL games will be played under FIBA rules. Our partnership with the NBA also involves refereeing, which means some of our referees will be trained by G-League referees. Games will be officiated by G-League and African referees. There will be an opportunity for clubs and federations’ managers to train under G-League administrators in order to develop their managerial skills.

FIBA.basketball: More and more fans continue to express their enthusiasm about the BAL, and one aspect that has been highly noticeable in recent years is the high attendance to major FIBA Africa basketball events.

AM: In the BAL’s first season, we target an attendance average of about 5,000 fans per game. That number could rise to 8,000 over time. That figure would include travelling fans. For those unable to travel we hope to create broadcasting platforms. But we have to make sure fans, players, officials and everybody are safe. This first year is an experimental one for the BAL, it will allow us to learn and make the competition better in the years to come. We are going to invest in quality to attract fans from all over the world watch our games. BAL is much more than basketball.

Facebook Comments
”We’ll try to do everything in our power to make the Basketball Africa League a reality this year,” says FIBA Africa President Manave