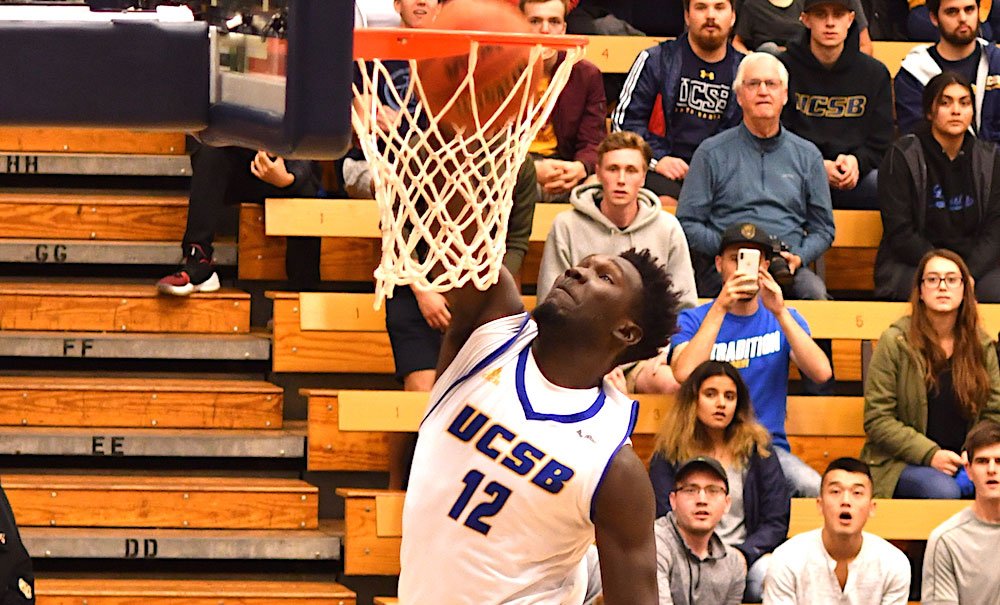 NCAA : Amadou Sow is Unstoppable in 2nd Half for UCSB in Win Over Hawai’i

Amadou Sow scored a career-high 30 points, including 24 in the second half, as UC Santa Barbara held of visiting Hawai’i, 76-66, for its second straight Big West Conference win on Thursday night.

“Amadou was sensational in the second half,” said head coach Joe Pasternack. “When he picked up the two first half fouls, we knew we’d have to sit him, but his second half was special.”

UCSB jumped out to a 5-0 lead to open the game and led the entire first half. The lead was at 33-21 before the Rainbow Warriors closed the half on a 12-6 run to cut the advantage to 39-33 at the break. The Gauchos shot 62.1% overall but were just 1-for-7 from three-point range in the first 20 minutes.

Sow played just six minutes in the first half, finishing with just six points and two rebounds. In the second half, the sophomore logged 18:14, making 9-of-10 field goals overall, including both of his three-point attempts, and all four of his free throws. He finished 12-for-13 from the field.

The three-pointer propelled UCSB to a 9-0 run that included a pair of free throws each from Robinson Idehen and Matt Freeman and another jumper in the paint by Sow to make it a 62-54 game with 6:26 remaining.

After Hemsley made a pair of free throws with 6:19 to play, the Gauchos responded with another 4-0 run to push the advantage to 66-56 with 5:15 on the clock. A three by Eddie Stansberry and a layup by Dawson Carper gave the Rainbow Warriors hope at 66-61 with 4:21 left, but back-to-back baskets by Sow, the second from three-point range, made it a 71-61 game with just over 3:00 to play.

UH cut the lead to 72-66 at the 2:06 mark, but Santa Barbara made all four of its free throws in the final minute to stretch the final lead to 10.

Max Heidegger joined Sow and Idehen in double-figures with 13 points. Devearl Ramsey had just four points, but added a game-high seven rebounds. Sow and Freeman each had six boards for Santa Barbara, which had a 33-23 rebound advantage.

After making 52.2% of their shots in the first half, the Rainbow Warriors were just 12-of-30 overall in the second half, 40.0%, to finish at 45.3% overall. They did make 7-of-20 from three-point distance for the game, including 5-for-13 in the second half. They were led by Hemsley who finished with 13 points. Carper added 11 while Stansberry and Justin Webster each had nine.

The Gauchos remain at home and will host UC Irvine on Saturday in a 7:00 p.m. game at the Thunderdome. The game against the defending-Big West champion Anteaters will be carried on ESPNU.

Facebook Comments
NCAA : Amadou Sow is Unstoppable in 2nd Half for UCSB in Win Over Hawai’i