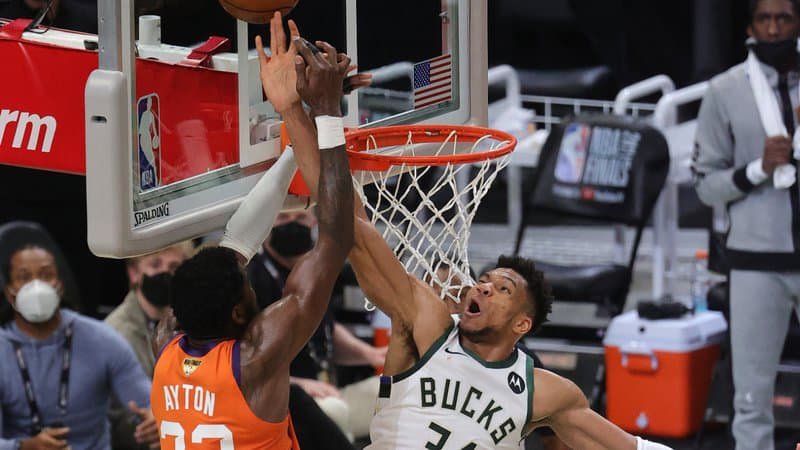 A monumental counter from Giannis Antetokounmpo and a record performance from Khris Middleton allowed Milwaukee to win (109-103) against Phoenix on Wednesday in a stifling game and equalize at 2-2 in the NBA finals.

Milwaukee defeated Phoenix for the second time in a row Wednesday (109-103) after a tough game that took endless time to decide, to come back tied in the NBA final (2-2). Balls that spin on the circle, that slip between the fingers, reversals of the situation as if it were raining, this fourth match of the final was played out in details.

Phoenix seemed to have caught the game by the right end at the start of the fourth quarter, taking a nine-point lead (85-76) on a three-point shot from Cameron Johnson. But the fifth fault of the back Devin Booker, forced to return to the bench when he was untouchable until then (38 pts at that time and 42 in the end), relaunched Milwaukee.

In style, with a remarkable offensive distribution, the Bucks came back to height three minutes from the end of regulation time, before carrying the blow during the last seconds. Symbol of the determination of Milwaukee, the monumental counter of Giannis Antetokounmpo on Deandre Ayton who was about to slam a pass lobbed in the circle, just over a minute from the final whistle.

The “Greek Freak” was less impressive than in the two previous matches (42 and 41 points) even if he still shone (26 pts, 14 rebounds and 8 assists). It was his loyal lieutenant Khris Middleton who made the difference for the first time in this final and spent 40 points in defense of the Suns who stuck him the whole game. He signs his personal best points in the playoffs. The two teams return to Phoenix on Saturday for the fifth round of this completely revived final when it seemed a time promised to the Suns.