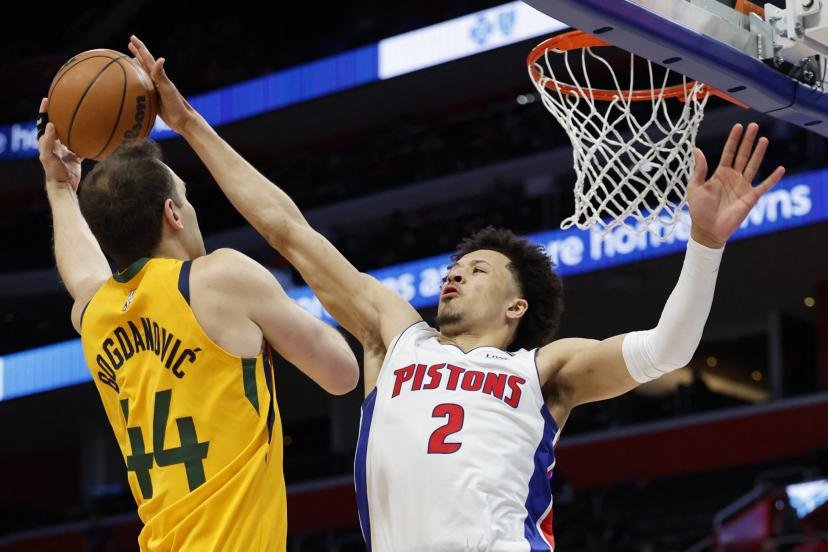 Without Rudy Gobert (COVID protocol), Utah was surprised by Detroit (116-126), the penultimate of the conference is Monday night. Boston ripped off the victory for extension against Indiana (101-98, a.p.) after an equalizer basket of Jayson Tatum at the end of regulation time.

The surprise of the night: Utah falls to Detroit Private from Rudy Gobert for four games, Utah conceded a third consecutive defeat, Monday night in Detroit (116-126). The penultimate of the conference is, the pistons made a nice comeback after being carried out by 21 points in the second quarter (29-50, 18th). The cade cunningham rookie signed the best match of his young career (29 points, 8 passes), well supported by Cory Joseph (16 points) and Saddiq Bey (29).

The 31 points of Donovan Mitchell did not suffice in Utah who sees Memphis melt on his third place in the West Conference. Holder in Detroit, the French leader Killian Hayes has finished with five points and three decisive passes.

The action of the night: Jayson Tatum saves Boston Torrey Craig is not varnished. Very good advocate, Indiana’s winger had seen Demar Derozan offer the victory in Chicago an incredible shot facing him on December 31. Monday night, Jayson Tatum planted a new decisive basket against Craig. After a dribble, the Boston winger (24 points) rose to equalize at 1’9 of the buzzer and send the match for extension. Five additional minutes who smiled at Boston (101-98, A.P.) thanks to the activity of the Robert Williams pivot (14 points, 12 rebounds, 4 interceptions, 3 counters).

The series: Embiaid in the footsteps of Iverson and Chamberlain on the move to Houston with Philadelphia, Joel Embid did not leave hope to the rocks. With 31 points, the Cameroonian pivot led the Sixers to a tranquil victory (111-91). EmbiaID has even benefited to sign its seventh game consecutive to more than 30 points. It is the third player of “philly” to succeed this performance behind Wilt Chamberlain and Allen Iverson, two legends of the franchise. The duo stopped eight ranking matches, a record that Embid could erase in the coming days.

Julius railed by his fans in NBA, time goes faster in New York than in other franchises. Eight months after being ovated by the Madison Square Garden with songs of “MVP, MVP! Julius Randle faced a much more hostile crowd on Monday night. The Knicks have imposed on San Antonio (111-96), thanks to 31 points of R.J. Barrett and 18 of Evan Fournier. Randle is spent next to his match (2 points, 12 rebounds). Hue when he committed a bullet loss, he suffered the songs to the glory of his replacement (Obi TopPin). The relationship between winger-fort and the New York public has deteriorated for a week. Facing Boston (108-105), Randle had pointed his thumb down in response to first hoots, then explained in a press conference that he asked the fans “to close it”. The NBA had sanctioned $ 25,000 a fine, and, despite its apology, some Knicks fans were looking forward to finding the winger-fort.

The unfinished return: Sacramento in Ohio, Cleveland supporters have spent a much more stressful evening than expected (109-108). With 2’20 ” to play, their team, however, made the gap in Sacramento (109-102, 46th). But the attack of the Cavs has stopped and the Kings launched a crazy lift. After two Frankish throws from D’Aaron Fox, the Californians even caused a bullet loss of Evan Mobley (17 points) to afford the Balloon de la Gagne. But the mid-distance shot of the same Fox did not find the path of the circle. At the great relief of the riders, always sixth to the east.