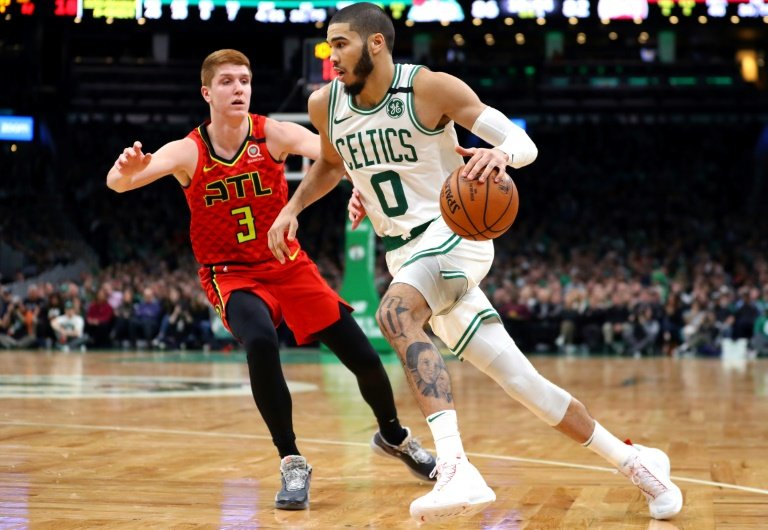 Jayson Tatum (d) of the Boston Celtics dribbles against Kevin Huerter of the Atlanta Hawks in the NBA on January 3, 2020 in Boston.

The Celtics consolidated their second place in the East, with a second straight victory against Chicago (113-101) which was first collective, even if Jayson Tatum was the best scorer (21 pts, 6 rbds) .

Five other Boston players scored between 11 and 19 points in the long-running game, leading 18 lengths in the second period.

“It’s more fun when everyone scores. Everyone is really happy with the success of the other,” commented Tatum after this meeting where Frenchman Vincent Poirier, returning from a finger injury, scored 2 points in five minutes.

Like two weeks ago, the Pacers took over the Sixers (101-95), who are six straight away away from home. A bad pass linked to the absence of their major player Joel Embiid, absent for three games due to an injury to the left hand.

Philly, worn by Ben Simmons (24 pts, 14 rbds) nevertheless led by 11 points in the 3rd quarter. But in the wake of Malcolm Brogdon (21 pts, 9 assists, 7 rbds), the Pacers finished better, like TJ (21 pts), author of a big cons at 29 seconds of the term on an attempt to three points from Tobias Harris.

Indiana took the opportunity to steal 5th place in the East at 76ers.

Oklahoma City youngster Shai Gilgeous-Alexander did not go into detail for the first triple-double of his career. His 20 points, 20 rebounds, 10 assists largely contributed to the Thunder’s victory (117-104) at the expense of Minnesota.

Aged 21 years and 185 days, he became the youngest player in NBA history to achieve a triple-double with at least 20 rebounds, ahead of the immense Shaquille O’Neal (21 years and 259 days).

A defector of the Clippers this summer, Gilgeous-Alexander is flourishing for his second NBA season in his new team, since he has doubled his averages in shots (19.9) and rebounds (5.3). Performances which reflect on OKC, 7th in the West.

The results of the North American Basketball Championship (NBA) after the matches played on Monday: