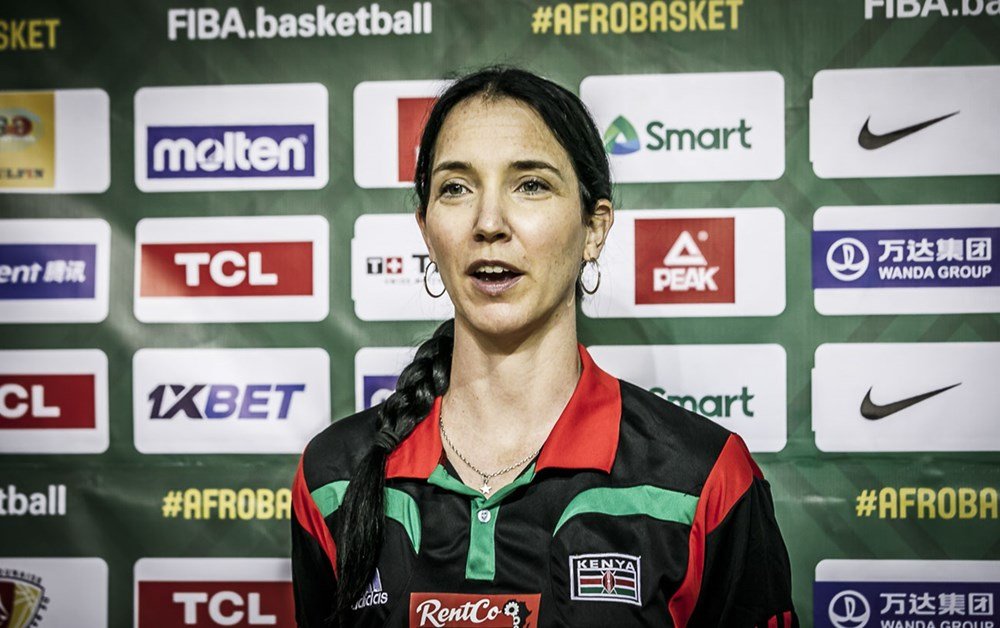 YAOUNDE (Cameroon) – A dream nursed in Sydney, that of guiding a men’s team, finally came to fruition in Yaounde as Liz Mills became the first female head coach of Kenya’s basketball team.

She is in charge of the Morans in the Second Round of the FIBA AfroBasket 2021 Qualifiers.

13,500 km away from home, the Australian’s quest to have more women offered top coaching positions is finally taking shape.

“I’m thankful to the Kenyan Federation who entrusted me with their drive for an AfroBasket qualification,” a teary-eyed Liz Mills told FIBA.basketball.

“I’ve been on the continent for close to a decade and I served on several occasions as head coach at clubs.”

“IT’S IMPORTANT FOR FEDERATIONS AND CLUBS TO TRUST THAT WOMEN CAN PERFORM.”– Liz Mills

“Later on I went on to be deputy coach at some national teams and top clubs but it is a truly great experience to return to being the head coach.

“My experiences as deputy coach have been amazing and I’m tapping from them to handle this position well and produce the results expected,” she said.

In 2017, Brigitte Affidehome Tonon inked her name in the annals of history by becoming the first woman to lead a men’s national team in Africa when she guided Benin to the regional qualifiers of the FIBA AfroBasket that year.

Thank you @yndoye35 🙏🏻🇸🇳 I’ve always been proud to coach in Africa & thankful to Africa, & specifically @Teammorans 🇰🇪, for giving me the opportunity to be the first female head coach of a men’s team at a major @fiba continental tournament 🌍❤️@FSBBOFFICIEL @Basket_Senegal pic.twitter.com/YaRhDhTyw4

While Tonon was setting the pace with Benin, Mills was honing her craft with Zambia’s men’s team where she was the second in command.

“We build on each other,” Mills said before adding “I have huge respect for Tonon. I remember I was with Zambia when she took charge of Benin and I thought to myself that’s something great.

“Hopefully, we can have another woman guide a men’s team to the AfroBasket or [FIBA] World Cup.

“What’s most important is to pave the way for the next generation of female coaches. To show to them that it is possible.”

Seeing Liz Mills with her trademark distinctive boots give out instructions hasn’t just seduced fans, it has attracted praises from some of the sports protagonists.

“We need to see more women trusted with top coaching positions in men’s teams in Africa because this will truly mean that there is gender parity and women’s empowerment in the sport.”

The Sydney native had barely envisaged she’ll be one of the precursors of female coaches at the helm of men’s teams especially as her verve for the sport only came during her teenage years.

“My twin sister and I grew up playing a lot of sport in Australia but we started with basketball when we were 15,” Mills hinted.

“But we had been watching women’s basketball since we were 11 and there were some exceptional female coaches at that level.

“I feel it probably sunk in at that level and I wanted to be as good as them too so I kept working hard, wishing that this opportunity will present itself.”

Watching renowned coaches Karen Dalton, Becky Hammon and Greg Popovich fuelled her love for coaching but Mills now believes if more women are to coach men’s teams, they need to be trusted.

“Men’s teams have embraced me in Africa so it is clear that there is a desire to see more women coaches head these teams.

“But it’s also important for federations and clubs to trust that women can perform. How then do you have more women coaching men’s teams if they’re not given the opportunity in the first place?” Mills questioned.

The former Patriots deputy coach is fully aware that significant progress can only be made in her crusade for more female coaches around men’s outfits if results follow and she’s now set her sight on an AfroBasket ticket for Kenya.

“As a team, our biggest worry is inexperience,” the Kenya head coach mentioned.

“The Morans have only played at three AfroBaskets and understandably so, there are some issues that you can only sort out with experience.

“I was very happy that we were able to play some great basketball against Senegal, which is easily a top-three team in Africa.

“Now we have two games left against Angola and Mozambique. All we need is a win to qualify for the AfroBasket. If I didn’t think it was possible, I wouldn’t be here.

“We have a group of fighters and I trust this team can get results,” Mills concluded optimistically.