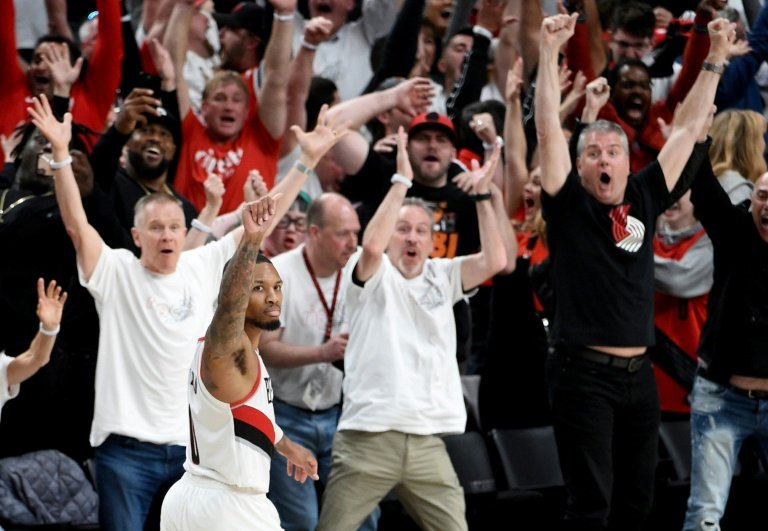 Damian Lillard, thanks to an incredible three-pointer at the last second almost ten meters from the hoop, qualified his Portland franchise for the semifinals of the West NBA conference, at the expense of Oklahoma City Tuesday .

Author of a crazy game at 50 points, the star of the Blazers took things in hand at five seconds of the siren, while the two teams were tied. But nobody imagined that the leader would stay so far from the circle to trigger his shot. The audacity paid off: the Thunder players, eliminated four games in the series and beaten 118-115 in this match N.5 while they led 15 points in the last quarter, found the damage, in front of a public of Portland in merger.

“Sometimes it’s your turn to have something to go through, and when you keep fighting, working, there’s a reward waiting for you,” said the 28-year-old.

His rival Oklahoma City, the iconic Russell Westbrook, is suffering a new disillusion: for the third consecutive year, he certainly achieved the exceptional performance of having a triple double of average (three units of statistics greater than 10) at the end of regular season, but his franchise was eliminated in the first round of play-offs. However, OKC has grown steadily in two years, with the notable arrivals of Paul George (2017) and Dennis Schröder (2018)

On the contrary, the Blazers were well diminished by the absence of their pivot Jusuf Nurkic, victim at the very end of the regular season of a frightful double fracture in the left leg. But Portland found the resources by giving the keys to the game to Lillard, also drawing a surplus of motivation in the defeat in the match N.3. On the floor at the end of this one, the players of the Thunder had not deprived themselves of celebrating with exuberance their first success of the series.

“They went out doing all these celebrations … After a victory, that’s what they decided to do, we said we wanted to win four matches, and that there would then have nothing more to say, “said Lillard.

Half known in the East

The Blazers do not yet know their opponent in the Western Conference half, but they know a little more. Denver took a major advantage on San Antonio on Tuesday, winning the match N.5 (108-90) in front of its audience to lead 3-2 in the series before moving to Texas on Thursday.

Everything is clear in the East, however, where the semi-finals are known. Unsurprisingly, Toronto and Philadelphia will be back, having secured their qualification on Tuesday by winning both in Game 5. The other half, known since yesterday, will pit Milwaukee against Boston.

As for the Philadelphia Sixers, they finished the job against Brooklyn, 122-100, after a game they have largely mastered, especially thanks to 23 points and 13 rebounds Joel Embiid.

He is not afraid to assert the ambitions of his franchise: “We will take match after match but we know that we have the talent to win everything,” he said.