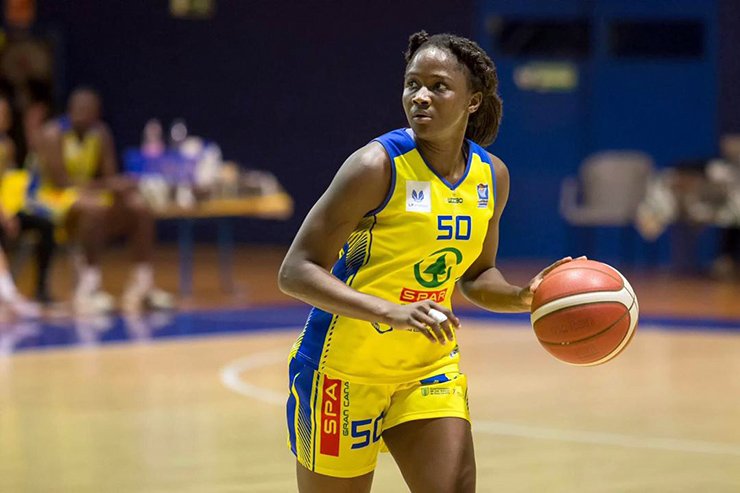 Embutidos Pajariel Bembibre’s commitment to youth is confirmed one more year with the incorporation of the 23-year-old Malian player – she therefore has a Cotonou passport – Djénéba N’Diaye. Height of 1m75, she is a leader – although she can play the role of an ally – who comes to the Berciano team after playing at SPAR Gran Canaria, where she became one of the sensations last season. of the revelation team of Ligua Endesa. She arrived there halfway through the 2019-2020 season after her stint at AMI Basketball in Morocco and after her first senior experience, between 2016 and 2018, at the Djoliba Athletic Club in Bamako in her country.

Absolute international, his last great experience with his team dates from the Afrobasket of 2019, during which the Malian team, who had two acquaintances of the Women’s League of Endesa like Meiya Tirera and Mariam Coulibaly, beat Mozambique in the consolation final. African champion in the U16 and U18 categories respectively in 2013 and 2015, being the offensive reference of her team, she won the silver medal at the African Games organized in the Moroccan capital, Rabat, in 2019.

Pepe Vázquez, satisfied to “have a base with experience”

Today she faces a new challenge on the banks of the Boeza and she does it with enthusiasm. Indeed, it ensures:

“I can’t wait to get to Bembibre and meet my new team, the people of the club, the supporters and my teammates. I don’t know much about the municipality, but I remember facing the team ”,

She knows the African players on the team, adding that “at all times there was a good understanding. I like the color of the jerseys, ”jokes an ambitious N’Diaye:

“My goal is to reach the Queen’s Cup. It is a goal that is achieved with hard work and as a team, with a common vision and unity, ”She added.

In the same vein, her coach, Pepe Vázquez, believes that “she has a challenge as she leaves her comfort zone that there was in Gran Canaria. She must take a step forward and continue to grow to become an important player in the Women’s League of Endesa ”, said the Galician coach, happy to achieve this incorporation:

“Once Roselis [Silva] told us that she was not renewing , my idea was to have an experienced leader in the category. We have this opportunity and we bet on her, who knows the competition, its difficulty, after having also played in Women’s Ligue 2 “, explains the coach of Santiago de Compostela, who highlights her experience at the level of the national team: a good job “.

Born in the capital of Mali, Bamako, N’Diaye signs for a campaign, 2021-2022, with the Bembibre team, in which she comes with a great rookie season in the elite. Unsurprisingly, out of the 32 games she played last year, she averaged almost 8 points, although that average exceeds 10 points if you only count the second round and the quarter-finals. dams. Their performances in victories and even comebacks against big rivals such as Ciudad de La Laguna Tenerife, Movistar Estudiantes or Lointek Gernika stood out. she scored 22 points against her new team with a 5/7 hat-trick.

Pepe Vázquez: “Fits the profile of a player who wants to grow up”

Regarding this first experience in the Endesa Women’s League, Pepe Vázquez believes that “she has been a player who has progressed less and more, achieving an excellent second round. She has room for improvement, she is young and fits into the profile of a player who wants to grow, “analyzes the coach of Santiago, who describes her as” a player capable of shooting at 3, very physical and who defends very good. Even if it will have to improve in the direction of the game, it penetrates well, “points out the coach of the Berciano team, who believes that” with Laura [Méndez] she can make a good tandem. If we take into account that Helena [López] can help in this position, we have the position well covered “, argues the Galician coach, adding that” she understands Spanish, which facilitates communication between the base and its trainer ”.

For her part, the new playmaker of the Bembibre team sees herself as “a full-fledged player. I will try to bring my intensity and my seriousness to training and my rigor both in defense and in attack ”, underlines the African base, adding that“ my speed also allows me to be a danger at all times. I also have the ability to lead ”, specifies the playmaker, who recognizes that“ during my first year in Spain, it took me a while to adapt to the style of play. President, the supporters and my teammates have helped me, “admits the former SPAR Gran Canaria player, very grateful and aware that” this is what made my transition to the Endesa Women’s League easier. It was an extraordinary experience, ”she concluded.