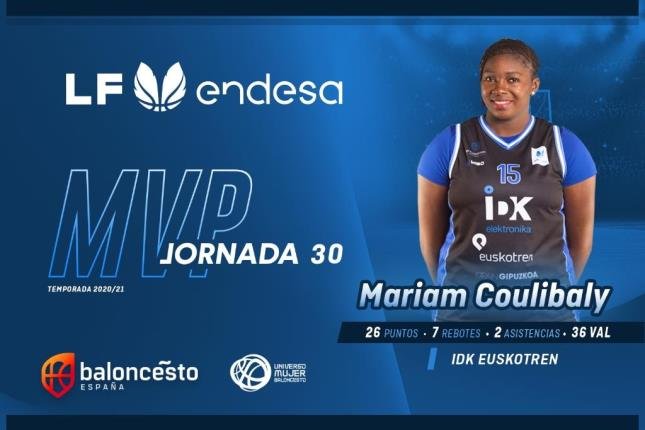 She entered the floor at La Fonteta ready to win the ticket to the Playoffs with her team, but her fine performance was not enough for ID Euskotren to be able to extend her season.

The final reaction of Valencia Basket, associated with the triumph of SPAR Gran Canaria, deprived Coulibaly of a final phase for which she fought with the key to an MVP title with a bitter taste for our protagonist.

There had been many occasions throughout this year when Mariam Coulibaly had been the main offensive support of the IDK Euskotren and no less those where she had been able to put her name in the ideal 5. The fate of the Basque team depended only on itself and that ended up evaporating over the night.

Coulibaly put everything on his side with a superb personal performance and leadership that allowed his team to see themselves in the lead after the first two quarters. But the 40 minutes at La Fonteta ended up being really long for a team that couldn’t convert their 26 points (6/7 TL and 10/13 TC), 7 rebounds, 2 assists, 2 blocks and 6 fouls. received, in a victory with which they would have had the pass (81-68).

She had to wait for what will happen in Zaragoza, but the news from the Maña capital was hardly better for her interests as the triumph achieved by SPAR Gran Canaria made the player’s valuation 36 sterile.

Anecdote
She had won two titles in the ranks of SPAR Gran Canaria on her debut in the competition and was even able to sign two more with Snatt’s Femení SantAdrià jersey on her playoff debut for the title. An area in which she has developed to perfection throughout her career, but which had resisted her throughout this season at IDK Euskotren where it took her 30 days to reach her usual title. The Malian player had tried with four appearances in the ideal five of the day.

The five ideal of the day:
It’s been a great year back in Spain, so there couldn’t be a better end to the season for Laia Flores (Campus Promete) than a day like this. Because the Catalan rear was once again decisive for the Rioja team. In this way, Laia laid the foundation stone for an ideal quintet in which she surrounded herself with the talent of a Frida Eldebrink (Spar Girona), as well as that of an Irati Etxarri (Cadí La Seu) who finished the course in big. A victory for his team and a performance to confirm his status as one of the best pivots in the competition.

Although one of the greatest battles of the weekend was in the inner game and hundreds of miles away. More precisely between Valencia and Zaragoza with the five-man fight between Mariam Coulibaly (IDK Euskotren) and Sika Koné (Spar Gran Canaria) to be able to take their respective teams to the Playoffs for the title.