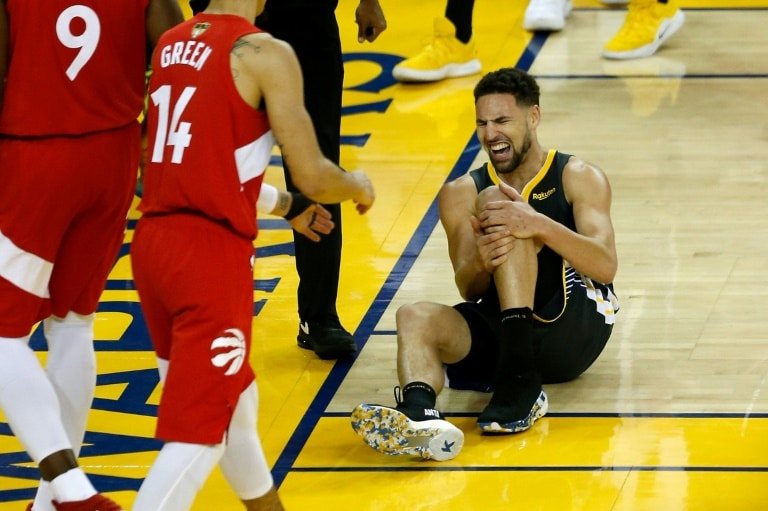 Golden State winger Klay Thompson suffered a broken anterior cruciate ligament in the left knee in the N.6 final of the 2019 final lost by his team (114-110), the Warriors announced on Thursday, dethroned by the Toronto Raptors.

Klay Thompson, who left the field two minutes and 22 seconds from the end of the 3rd quarter because of a left knee injury, did an MRI on Thursday night that confirmed he was suffering from a broken knee. anterior cruciate ligament, “said his team.

The Warriors did not give more details, especially on the duration of his absence.

Thompson, the game’s leading scorer with 30 points, was injured after being unbalanced by Danny Green.

He was heading against the basket and jumped to score, when Green jostled him while trying to counter him. On receiving the jump, his left knee twisted and Thompson dropped to the ground.

Thompson first regained the locker room, before having to return to the field to shoot the two free throws whistled by referees for the fault of Green.

He then tried to stay on the ground before heading back to the locker room for a medical examination that diagnosed a serious injury.

Golden State, which was aiming for a third straight title, lost four straight wins in Toronto.

The Warriors were already without their best scorer Kevin Durant, victim Monday of an Achilles tendon rupture while playing his first match for a month.

Thompson, 29, was injured as Golden State seemed to take over Toronto.

He missed the N.3 game in the final because of an adductor injury and averaged 26 points per game against the Raptors.