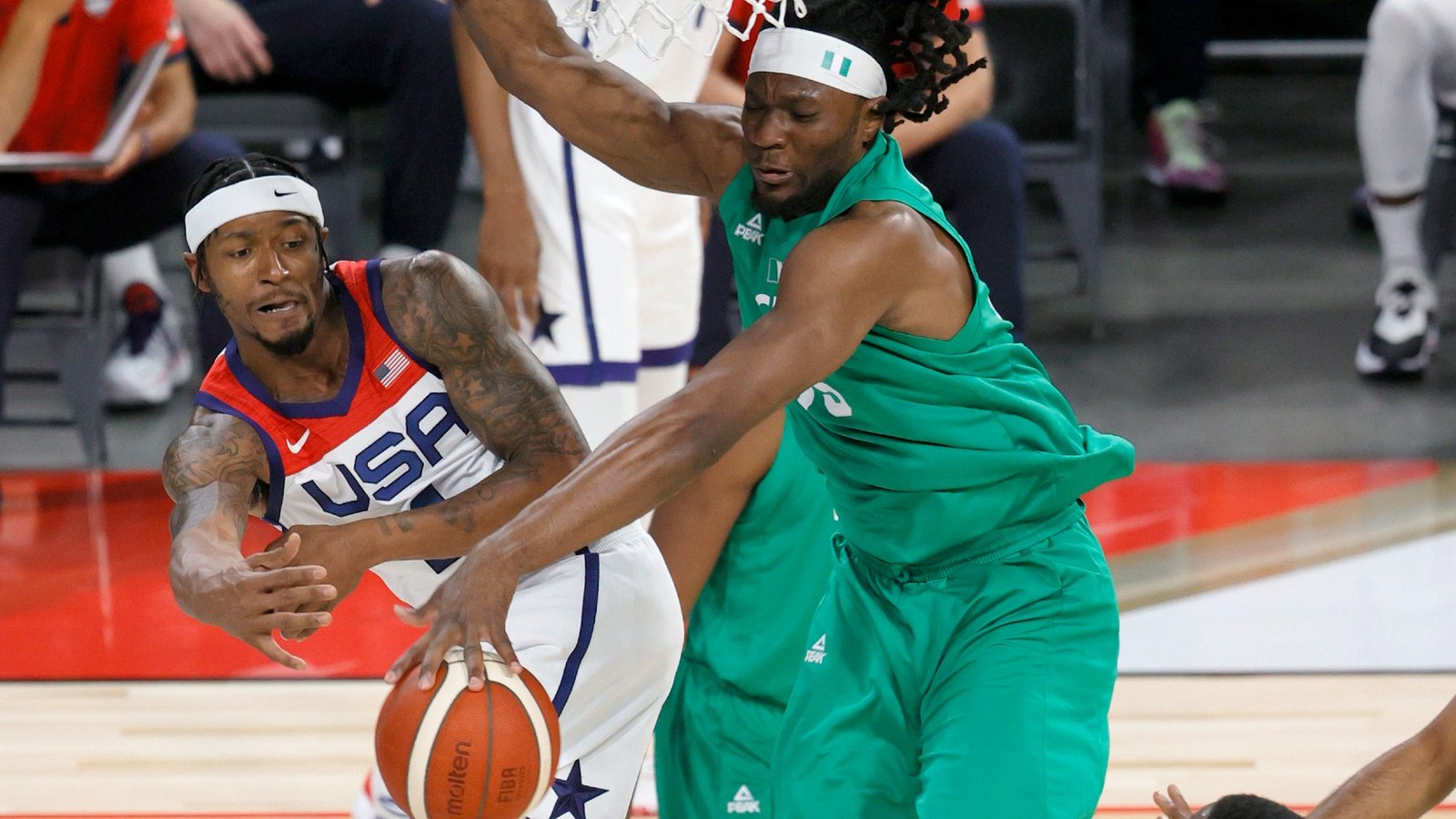 Favorite 30 points by bookmakers, the United States were beaten by Nigeria (90-87) in their very first warm-up match before the Tokyo Olympics.

Eliminated in the quarter-finals of the 2019 World Cup in China (by France), their last major international competition, the United States began their Olympic campaign in the worst possible way. On Saturday night, they lost 90-87 to Nigeria in Las Vegas, after a game they had approached as the favorite with 30 points margin according to local bookmakers.

“In a way, I’m glad it happened,” said Gregg Popovich, Team USA coach. This game can be the most important of our Olympic ‘tournament’ if we can learn from it. We have a group of great guys with a lot of character and we will find the solutions. This was not the case in the hall of Mandalay Bay in Las Vegas on Saturday.

Trained by Mike Brown (Steve Kerr’s current assistant to the Golden State Warriors in the NBA) and led by seven players in the American League, Nigeria showed superior physical presence, especially under the baskets with a 46 advantage. rebounds against 34 to the Americans (including a difference of 13 to 7 on offensive rebounds). “The rebound was a problem,” Popovich confirmed. I almost sent the stats sheet back to whoever brought it to me, telling him that we had to redo it, that there had to be a mistake … because we got murdered on the rebound. “

During the London Olympics in 2012, the United States beat Nigeria, which was participating for the first time in the Olympics, by 83 points in the group stage (156-73). Nine years later, things have changed a lot.

There was also this formidable three-point skill with twenty successful award-winning shots (at 48% success). Miami Heat point guard Gabe Vincent was the hero of the game with 21 points including an excellent 6 of 8 at three points. The twenty-five player also provided four assists. Nigeria will play its third Olympic Games and will play in Group B with Italy, Germany and Australia.

First defeat against an African nation

American side, Kevin Durant, figurehead of this selection, suffered the defeat for the first time in the jersey of Team USA (he had 39 victories so far). The Brooklyn Nets player scored 17 points in 28’44 of play, adding five rebounds, four assists and two steals. But he was clumsy for this game of recovery (4 of 13) just like Bradley Beal (1 of 7), weighing down the team’s winning percentage (42% in total).

The evening had a particular flavor for Bam Adebayo (11 points and 5 rebounds in 17 minutes) who could have chosen to wear the colors of Nigeria (where his father was born). The Twitter account of the African team did not fail to chamber inside the Miami Heat after the meeting. “Respect to the motherland,” replied Adebayo after a smiley laughing to tears.

After siding behind the excuse on Saturday of having only had four days in common before playing this meeting, the Americans will have the opportunity to correct the situation with four additional preparation matches before flying to Tokyo ( where they will face France, on Sunday July 25, at the opening of their tournament). On the program Australia twice (Monday and Friday), Argentina (Tuesday) and Spain (Sunday) with no room for error. After this historic misstep against the Nigerians – the first defeat against an African nation – the slightest relapse will be seen as a huge admission of weakness on the part of a selection which, weighed down by the absences of many superstars (LeBron James, James Harden Stephen Curry …), seems to scare his opponents less and less over the years.