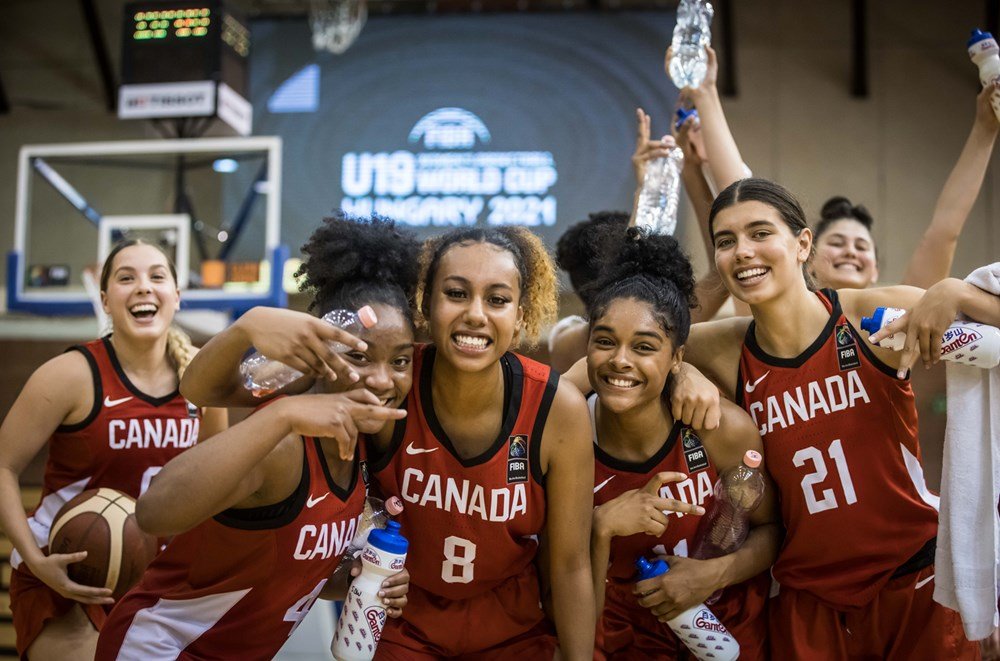 DEBRECEN (Hungary) – One of the three previously unbeaten sides heading into the Round of 16 were eliminated from the FIBA U19 Women’s Basketball World Cup 2021 on Wednesday in a dramatic start to the knockout stages.

The field has been split in half to leave eight sides in contention for being crowned champions this weekend as the tournament now heads into another rest day.

Here’s a look back through the Round of 16 matchups:

The United States  tied their own U19 scoring record – first set in 2005 – with a huge 129-point outing on their way to another crushing win over Chinese Taipei. An incredible nine of the 11 players that took to the court scored at least 10 points with the eight-time winners finishing with 38 assists having scored 40 points in the third quarter.

Payton Verhulst finished with 18 points, 8 rebounds and 6 assists with Caitlin Clark and Sonia Citron continuing their impressive all-round tournaments. It was always going to be a tough task for Chinese Taipei but they had their best scoring quarter in the fourth and can now target a first win in the 9-16 Classification Round.

Spain were pushed all the way by Japan before confirming their spot in the last eight. They needed an 11-0 run in the fourth having turned a 54-59 deficit into a six-point lead in a controlled finish down the stretch.

Elena Buenavida went 8-of-10 from the field for a team-high of 16 points to help lead the way for Spain, who now head into a last eight showdown with the title favorites, USA. It was a spirited effort from Japan – with 20 points from Yua Emura – though they miss out on a top eight finish for the first time since 2009.

There was joy for the hosts in an all-European battle as they overcame Italy to match their previous best run of making it to the last eight on their debut appearance in 2005. Hungary looked in control early on but the hosts needed to respond to a revival from their opponents having briefly trailed in the third quarter.

Reka Dombai and Eszter Madar scored 13 points apiece with Julia Boros also reaching double figures with 10 points to lead Hungary to the win, while Ilaria Panzera kept Italy in contention with 14 points, 8 rebounds and 6 assists in an eventual defeat.

The Czech Republic advanced to the Quarter-Finals at the event for the first time since 2007 after overcoming Brazil in a double-digit victory. Petra Malikova had 15 points, 9 rebounds and 4 assists to lead the way with Katerina Zeithammerova also adding 15 points.

There was only a single point between the two teams at the half before the 2001 winners moved out to an 11-point lead ahead of the fourth and there was no way back for Brazil, who still await their first win this week.

Australia continued their proud record of having finished inside the top eight at every U19 Women’s World Cup as they progressed to another Quarter-Final appearance. The Gems brushed aside the challenge of Argentina with relative ease as a 23-5 start laid the platform.

Nyadiew Puoch and Dallas Loughridge both hit double figures off the bench as Australia concluded the day’s action in Debrecen with their chances looking good for another podium finish in what would be their fourth in the last five events.

Down go France. Just a day after Canada were blown away by Mali, they bounced back and knocked out the 3-0 podium candidates. Canada led 20-12 after 10 minutes, and after France stormed back to lead by 13 in the third, there was another twist transpired as they finished strong to claim a memorable victory.

“I feel very proud,” said Canada’s Yvonne Ejim. “We definitely worked together through it all and it was just a great team effort overall. If we bring out the same energy and are consistent together then we have a good chance of competing against the teams in the top eight.”

Shayeann Day-Wilson struggled to replicate her scoring streak, going 2-of-17 from the field, but found other ways to contribute with 8 assists and 4 steals to go with 11 points. Four other players hit double figures with Tara Wallack adding an efficient 16-7-4-4 line, while Rebecca Demeke top scored with 19 points off the bench.

Anastasia Kosu posted another double-double with 16 points and 14 rebounds to keep Russia rolling on and into the Quarter-Finals. They proved too strong for Egypt as they dominated the middle periods to move out of sight.

Egypt kept fighting and edged the final quarter 22-20 in a determined finish with Sandy Abdellatif top scoring with 14 points. The damage had already been done by Russia as they were able to rest up for Friday’s last eight encounter with a game-high 18 points from Olesia Tumanova.

Mali made it back-to-back Quarter-Final appearances at the U19 Women’s World Cup as they pulled away from Korea in another convincing victory. They made their move in the second before backing it up with a 26-5 third period and next face Russia in a battle of two of the strongest teams in the competition, so far.

Sika Kone posted a third successive double-double with 19 points and 13 rebounds in the win, while Maimouna Haidara added her own double-double of 17 points and 11 rebounds as Mali dominated the battle of the boards, out-rebounding their opponents 69-31.

Player of the Day: Tara Wallack (CAN)

Wallack had scored a combined total of 17 points through the Group Phase, but stepped up with 16 points in a stunning win over previously unbeaten, France. The 18-year-old forward also added 7 rebounds, 4 assists and 4 steals in an impressive all-round display to help Canada pull off the result of the day and advance to the Quarter-Finals.