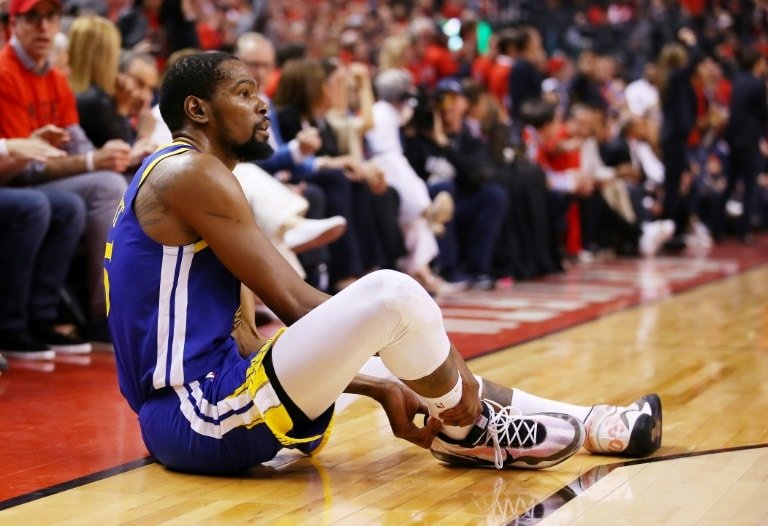 The dreaded diagnosis fell on Wednesday: Kevin Durant suffers from an Achilles tendon rupture of the right leg and the Golden State winger will be away from the NBA courts for long months.

It was Durant himself who announced the news.

“I broke the Achilles tendon, the operation took place today and was a success,” wrote the best player of the 2015 Championship on his Instagram account, in caption of a photo showing him in a bed hospital.

“My journey back (on the floors) has already begun, my family and relatives are with me and we have sincerely appreciated all the signs of affection and support that people have sent us”, he said. added.

“It’s going to be a long way, but I’m good at it, I’m a basketball player,” said the long-serving winger.

Durant, 30, was injured Monday in the N.5 game of the 2019 final between Golden State and Toronto.

While trying to outflank Toronto’s Spanish pivot Serge Ibaka, he stopped playing and collapsed while holding his right leg in the early second quarter.

He had returned to the locker room supported by a teammate and a healer, under the whistles of Toronto fans, too happy to see Golden State declined after the loss of his best scorer.

His injury triggered a controversy, because Durant had not played for a month and had been treating since 8 May tear right calf.

Some observers had accused Golden State of playing with his health. A charge that Durant himself swept after his operation.

“As I said on Monday, my heart hurts, but I’m fine, basketball is my greatest passion and I wanted to be on the field on Monday to help my teammates in our quest for a third as a result, “he insisted.

“It’s just the life of a basketball player, I’m proud to have been able to give everything physically, I’m proud of my brothers for their victory,” continued the best player of the last two NBA Finals.

This did not stop his coach Steve Kerr from expressing his regrets.

“We had collected all the possible information that told us that the worst that could happen to him was that he rebleed in the calf (…) If we had known that he could have hurt himself so seriously or even that it was a possibility, we would never have let Kevin replay, “admitted the coach of the NBA doubles champions.

Durant, who scored eleven points in the 12-minute victory at Golden State (106-105) in Toronto, will now begin a long and grueling recovery.

Teammate DeMarcus Cousins, who broke an Achilles tendon in January 2018, did not return to competition until a year later.

One year for Cousins, 8 months for Bryant

The injury could also change the face of the transfer market that officially opens in the NBA on July 1.

Durant was able to cancel his last year of contract with Golden State, his team since 2016, to become a “free agent”.

The winger, who weighs 27 points and 7.1 rebounds per regular season game since his debut in the NBA, was to generate much interest, including the New York Knicks and Los Angeles Lakers.

He could now remain in Golden State until the end of a contract for his recovery during which he is assured of receiving a salary of 31.5 million dollars (27.8 million EUR).

With a major player in less, the transfer window summer may be hectic to recruit the other stars at the end of the contract, as Kawhi Leonard (Toronto), Kyrie Irving (Boston), Jimmy Butler (Philadelphia) and Klay Thompson (Golden State) .

In the meantime, Durant has been supporting his team which is leading three wins to two in the 2019 final before the match N.6 Thursday in his room.

“I know my brothers can win this match N.6 and be behind them with all + Dub Nation +,” he said.

Durant has received support from his teammates and other NBA players but also from American sports stars like New England Patriots quarterback Tom Brady.

“You will come back stronger than ever, I have no doubt,” he said.