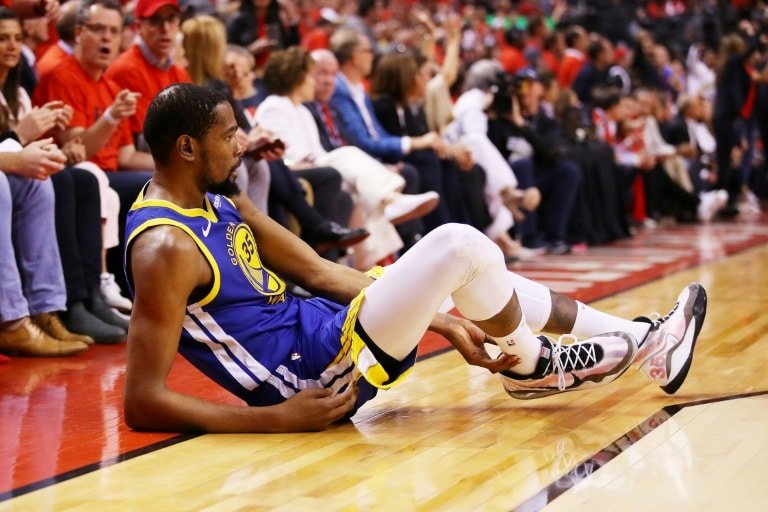 The final of the 2019 Kevin Durant ended a quarter of an hour after starting: the winger of Golden State, unavailable for a month, has replayed, but quickly reblessed Monday and may be a long time away from the NBA.

Golden State snatched the right to hope by winning 106-105 on the Toronto floor who could be NBA champion.

The Warriors are not out of business and are still led (3-2). More serious, they will be deprived for the match N.6 Thursday at home of Durant who, one month after a tear in the right calf, this time injured the Achilles tendon of the same leg.

It is little to say that this new injury of their winger, voted best player (MVP) of the last two finals, shocked the Warriors.

“We do not want to celebrate this victory, it sucks,” swept Stephen Curry, after seeing Durant spent a few minutes from paradise to hell.

Despite a month of absence, the 30-year-old winger splashed his class in the first quarter by scoring eleven points in twelve minutes of play and giving his team a conquering pace.

But he did not go past the second quarter: he was injured on a support while he was fighting with the Spanish interior of Toronto, Serge Ibaka.

Stricken by the pain, he dropped the ball, dropped to the ground and quickly realized that this injury was different from the first, more serious too.

Toronto fans were initially happy to see him back to the locker room with a limp. But the Raptors players, leader Kyle Lowry in the lead, made their gestures to demand silence and respect.

“Our supporters have not grasped, I think, the seriousness of his injury – in this championship we are all brothers and we do not want to see an opponent fall like that,” said Lowry.

At the end of the match, Golden State General Manager Bob Myers confirmed the much-feared diagnosis.

“Kevin is injured Achilles tendon, we do not yet know the seriousness of his injury, he will pass an MRI Tuesday,” said the leader, on the verge of tears.

Durant sent a message to his teammates on social networks to congratulate and thank them.

“Of course, I’m feeling worse now, but having seen my brothers win such a victory, it’s as if I had drunk a + shot + of tequila, I have a new life,” he wrote on social networks.

Without Durant who has scored 34.2 points per game since the start of the play-offs, Golden State is clearly less formidable.

“Without him, we are really a good team, but if we add it to the equation, we are, I think, one of the best teams in history,” said teammate Klay Thompson.

But the winger wants to believe that his troubles will inspire the Warriors.

“We’ll do it for + KD + (…) Knowing that our best player can not play will give us extra motivation,” said Thompson.

“We’re going to think about him every time we go diving to save a ball or to catch a rebound, saying that he would like to be there,” he added.

This is not the first game of these 2019 play-offs that Golden State will play without its best scorer.

He had missed the previous nine games, which had not stopped Golden State to eliminate Houston (4-2) and Portland (4-0).

But against Toronto who won three of the first four games thanks to an uncompromising defense and his offensive firepower, his absence is hard felt.

Especially since he was not the only one to have been injured on Monday: the inside Kevon Looney, hit the ribcage, he relapsed and could not finish the match N.5.

“All we live on negative strengthens us,” said veteran Andre Iguodala, as if to be convinced.