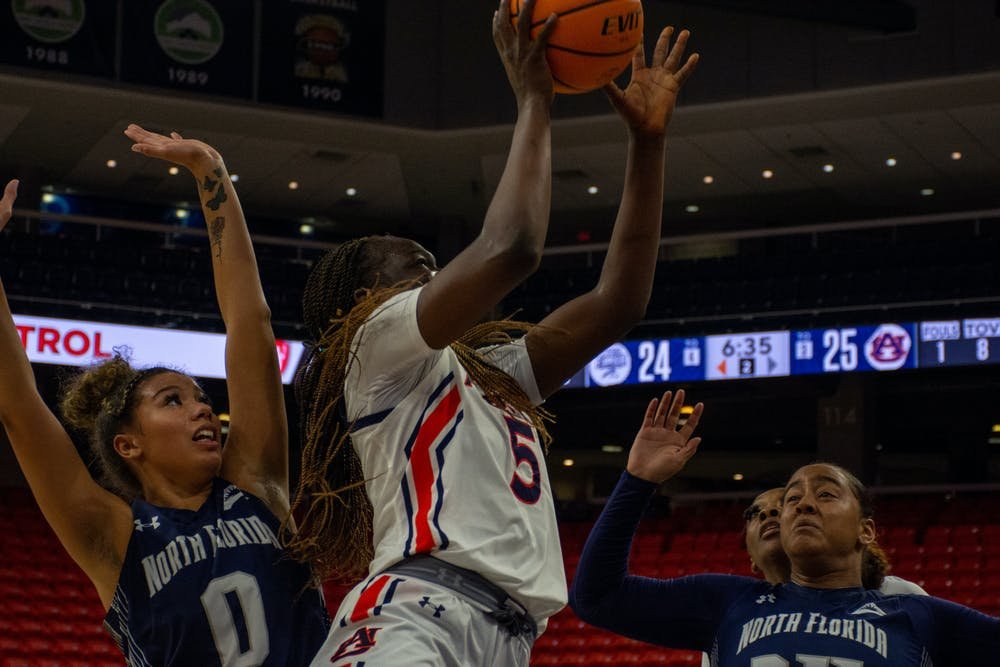 Nov. 30, 2021; Aicha Coulibaly (5) scores a basket in between two North Florida players at a home game from Auburn Arena in Auburn, Ala.

For the first time in 334 days, Auburn women’s basketball has a winning record. The Tigers defeated North Florida for a second consecutive season on Tuesday, 72-65, behind another team-leading performance from Aicha Coulibaly.

Coulibaly, who played a career-high 39 minutes and built off ofher career performance last Friday, turned in another 20-point outing. This time, the sophomore from Mali had 23 points and shot 10-for-18 from the field.

Having the strong start that Coulibaly has had over the past two games has helped the Tigers offense get going, Scott-Grayson touched on.

“AC gonna be AC,” said guard Honesty Scott-Grayson about her teammate. “When she’s on fire, you gotta keep dishing it to her, let her do her thing. Proud of her today and how she performed.”

She was one of four Tigers in double figures scoring, along with Annie Hughes (10 pts), Sania Wells (10 pts) and Honesty Scott-Grayson (13 pts).

Neither team was able to pull ahead significantly in the first quarter, as it was a blow-for-blow opening to the game. Auburn went on a 7-0 run early in the first, North Florida answered with a 5-0 run. Another quick burst of offense put the Tigers ahead again before a second 5-0 run by North Florida closed the gap once more.

With both teams shooting over 50% from the field in the first and Auburn held a slight two-point advantage heading to the second quarter.

Coulibaly and Wells continued to add to the scorecard in the second, but a pair of Amoura Graves’ 3-pointers was the difference-maker. The Tigers outscored the Ospreys 17-12 in the second to take a 37-28 lead into halftime.

Moore was largely kept at bay in the first half, only scoring one bucket, but led the team with seven points in the third. Her seven points were enough to bring North Florida back to tie the game at 54 heading into the fourth quarter.

Finishing games has been a focus for this team all season. And the Tigers did just that against North Florida.

“We wanted to finish, without fouling of course,” Scott-Grayson said. “I felt like we had a team effort to just try to be as perfect as we can, to make sure that we didn’t make them go on a run.”

“We work on that everyday,” said head coach Johnnie Harris. “I put them through pressure free-throws yesterday at the end of practice when they were tired. They stepped up and knocked down some really big free throws. 81%, you’ll pretty much take that every night.”