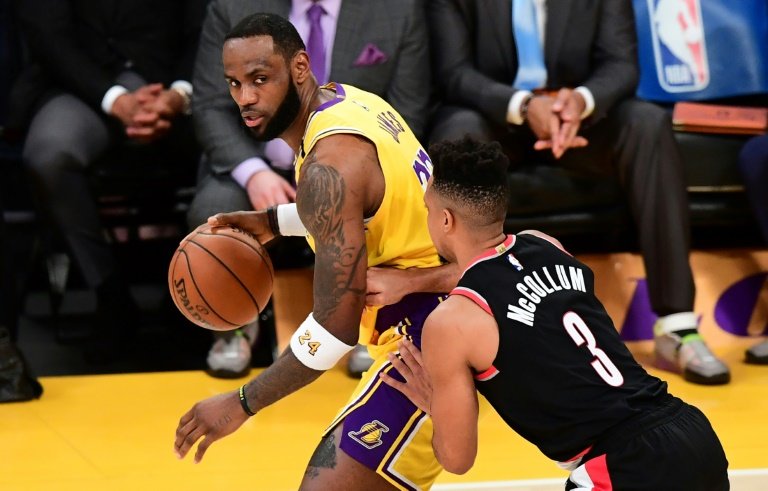 LeBron: Lakers ready to play despite call to cancel NBA

LeBron James refuted a report saying some NBA executives and player agents are calling for the halted 2019-20 NBA season to be wiped out, saying he and his teammtes are ready to return from the coronavirus shut down once it’s safe to play.

Los Angeles Lakers superstar LeBron James said Thursday he’s ready for the NBA to return, refuting a report some agents and team executives want the league to scrap the 2019-20 season.

The NBA halted the current campaign on March 12 after Utah’s Rudy Gobert tested positive for the coronavirus.

CNBC reported Thursday that unnamed player agents and club executives say team owners worry about liability issues due to health concerns and a lack of revenue from playing in an empty arena for a television audience.

James, a four-time NBA Most Valuable Player and three-time NBA champion, disputed the report, saying he and his Laker teammates are prepared to finish the season when officials deem conditions are safe to do so.

“Saw some reports about execs and agents wanting to cancel season??? That’s absolutely not true,” James wrote in a Twitter posting.

Saw some reports about execs and agents wanting to cancel season??? That’s absolutely not true. Nobody I know saying anything like that. As soon as it’s safe we would like to finish our season. I’m ready and our team is ready. Nobody should be canceling anything. 👑

“Nobody I know saying anything like that. As soon as it’s safe we would like to finish our season. I’m ready and our team is ready. Nobody should be canceling anything.”

The Lakers boasted the best record in the Western Conference, and the second-best in the league, at 49-14 when the league shut down with about a month of the regular season remaining, plus two months of playoffs.

Players would need time and opportunity to practice and regain fitness before resumption of play, even in empty arenas in a central location, key aspects of most of the plans discussed about how a season might proceed in the wake of the deadly virus that has shut down sport.

“It is the responsibility of the league office to explore all options for a return to play this season,” an NBA spokesman told CNBC.

“We owe that to our fans, teams, players, partners and all who love the game. While our top priority remains everyone’s health and well-being, we continue to evaluate all options to finish this season.

“At the same time we’re intensely focused on addressing the potential impact of COID-19 on the 2020-21 season.”

The NBA and its players union have agreed on the league withholding 25% of player salaries starting in May.

The league says players could begin individual workouts will be permitted at team facilities starting May 8 in areas where governments permit it, a small step on the path to resuming play but far from a timetable that many fans hope to hear in May.

NBA ownership groups include many business partners who are losing money in other investments due to the coronavirus shutdown, the report noted.

“Some of them are looking at vast losses outside of just their basketball team,” Andy Dolich, the Memphis Grizzlies former president of business operations, told CNBC.

White House health adviser Dr. Anthony Fauci told the New York Times that all sports might have to face a season wipeout, saying, “If you can’t guarantee safety, then unfortunately you’re going to have to bite the bullet and say, ‘We may have to go without this sport for this season.'”

But among the plans the NBA is reportedly considering is gathering teams at hotels and sports facilities at Disney World in Orlando, Florida, where access could be controled.