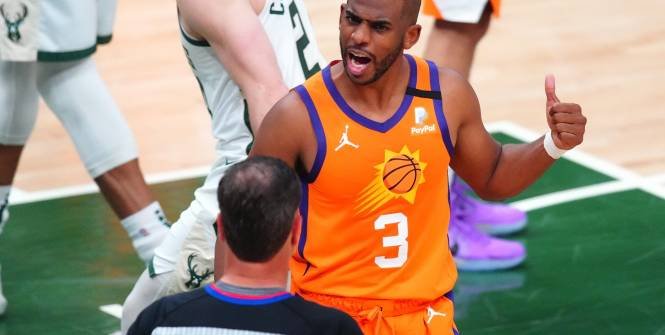 The Suns point guard knows that Phoenix shot himself in the foot with the balls lost in Game 4 of the NBA Finals. Especially with a 42 point Devin Booker.

Chris Paul (10 points, 7 assists, 5 loss of ball), after the second loss against Milwaukee: “The loss of ball, and suddenly their points on the counter-attack, it’s my fault. It’s me. I had 5 (out of 17). I made bad choices. We are two points behind at the end of the game, and I try to change hands but I slip and lose the ball. They have been given too many opportunities. You can’t shoot so well and not give yourself enough chances to score.

Monty Williams, Phoenix Suns coach: “When we have this kind of lead in the fourth quarter (7 points), if we can just keep the ball and give ourselves good possessions, the score should at least stop there. . I’m going to watch the movie to see if it was our systems or their defense, I’m not sure yet, but we really shot each other in the foot this (Thursday) night. It was hard not to have Devin Booker (5th foul at the very start of the fourth quarter). He could have scored 50 points. I would have liked to put it back a minute earlier but hey, we were still ahead it seems to me. I’m not worried about Chris (Paul), great players sometimes have matches like that: he lost 5 balls, but we made 17, so hey, it was our match that was like that. They’ve also been really aggressive on the offensive rebound over the past two games, which they weren’t doing before. We must block them further from the basket. “

Devin Booker (42 points, 5 faults): “It’s really hard when you can’t win a game, especially at this time of the season. I was on the bench much of the fourth quarter, but we were still ahead. We will have to be more physical in the next game. I think I was still on the beat when I got back on the floor, but it didn’t really matter in the end. “