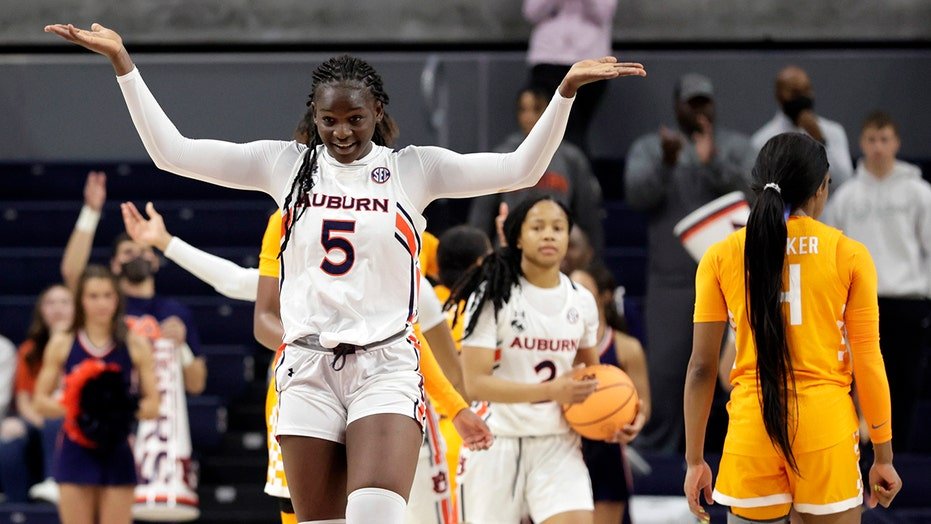 Aicha Coulibaly and Auburn didn’t have any trouble sealing the deal this time, even against Southeastern Conference power Tennessee.

Coulibaly had 26 points and Auburn scored 11 straight late in a 71-61 upset of No. 4 Tennessee, ending the Lady Vols’ nine-game winning streak Thursday night.

It was Auburn’s third game in five days.

“We’ve been right there in so many ballgames and we’ve been talking to them about finishing,” Tigers coach Johnnie Harris said. “Once we got in that locker room tonight, I asked them if they were tired. No, nobody was tired.

The Tigers (9-10, 1-7 Southeastern Conference), the last SEC team to grab a league victory, built an 11-point halftime lead and closed strong. Tennessee (18-2, 7-1) came in as the lone SEC team with a perfect league record, but went six minutes without a field goal before a meaningless basket with two seconds left.

Coulibaly made 10 of 14 shots and had seven rebounds for Auburn, which had blown two straight fourth-quarter leads but took over in the end this time. The Tigers dominated the fourth 21-10.

“They’ve been knocking on the door in some close games here recently and just weren’t able to close it out. They played with great aggressiveness all night long.”

Sania Wells added 13 points for Auburn, while Jala Jordan finished with 11 and Annie Hughes had 10.

Auburn turned a 10-point first-quarter deficit into a 39-28 halftime lead. Jordan hit a 3-pointer from the top of the key with four seconds left to give the Tigers their largest advantage of the half.

Auburn, playing without center Precious Johnson, scored the final nine points of the first quarter to cut a 10-point deficit to 17-16.

Some fans and students celebrated on the court afterward.

Horston scored six straight points to punctuate a 12-0 run starting early in the third quarter to help give Tennessee back the lead.

Mar’shaun Bostic hit a layup at the third-quarter buzzer to pull Auburn to 51-50. Then the Tigers took over.

“I feel like we just didn’t come out playing our game,” Horston said. “We came out kind of complacent, which I feel like we’ve never done before. They played harder than us tonight. I feel like they played their best game tonight.”

The Lady Vols are without center Keyen Green, who tore an ACL in last weekend’s win over Georgia. Harper said that loss “shook our confidence.”

“I just feel bad for the next team that plays us, because we’re not going to let it happen again,” she said.

Tennessee committed seven turnovers in the second quarter, a problem that plagued the team throughout. It was the Lady Vols’ first loss since falling to defending national champion Stanford on Dec. 18.