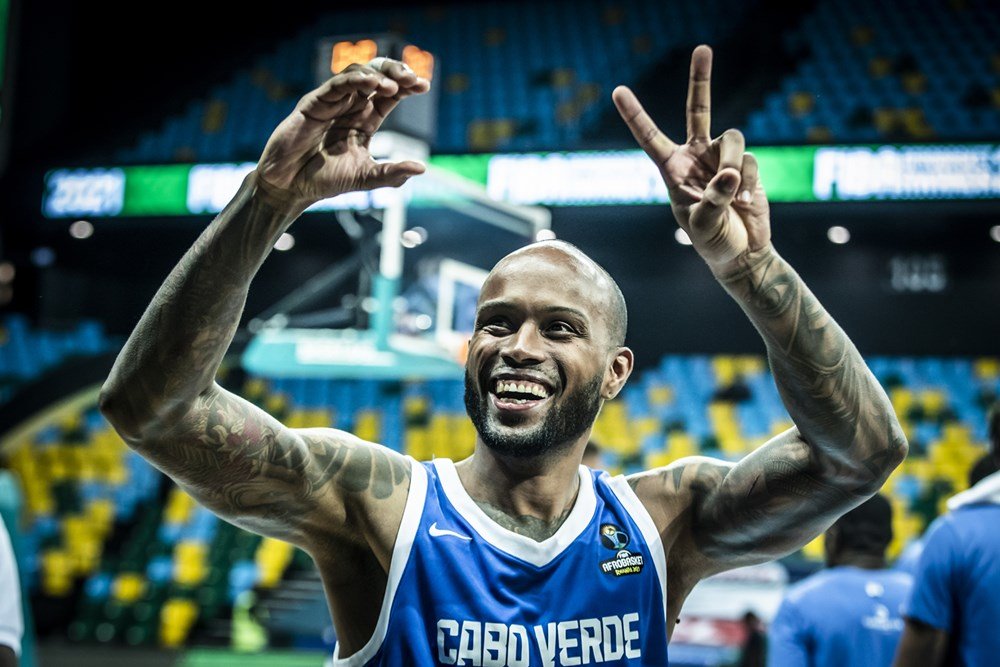 KIGALI (Rwanda) – Cape Verde have caused the biggest upset in the FIBA AfroBasket 2021 so far after beating eleven-time African champions Angola 77-71 in overtime.

Angola led by twelve points at some point in the game, but Cape Verde rallied to tie the contest 66-66 at the end of regulation, before they pulled away in the remaining five minutes for the historic win.

Walter Tavares, who had last played for his country at AfroBasket 2013, proved fundamental for Cape Verde.

The 2.22m (7ft 3in) center Walter Tavares proved too much for the Angolans

“We fought the whole game and we got what we deserved. This is just one win, we have to go step-by-step, respect everybody and try to win games,” Tavares later told FIBA.basketball.

Angola great and former AfroBasket MVP Carlos Almeida led all players in scoring with 21 points off the bench, but the story of the game was clearly Tavares’ dominance at both ends of the floor.

So much so, that the game had to be interrupted for approximately 25 minutes after the former NBA player shattered the backboard following one of his many dunks with a minute left in the regulation.

But there was one Angolan celebrating.

“It’s hard for me to describe my feelings because I was born in Angola, but my experience at AfroBasket says, the most important thing is not how you begin the tournament, but how you finish it. But I am glad that we made history and am happy for my players,” said Cape Verde head coach Emanuel Trovoada.

For a team that spent most of their preparation on home soil without facing top teams, this was a huge statement of Cape Verde’s AfroBasket intentions.

With the win, Cape Verde share the top of Group A alongside hosts Rwanda.

Earlier in the day, local fans showed up in big numbers at Kigali Arena to witness their heroes beat neighbouring Republic of Congo 82-68 in a highly-contested game.

Among the thousands of fans inside the Kigali Arena was Rwanda President Paul Kagame and members of his family.

Dieudonne Ndizeye buried four of his six three-point attempts en route to 12 points off the bench and William Robeyns made his Rwandan debut in style sinking 5-of-9 from behind the arc to finish with a game-high 23 points.

After a shaky start to the game, Egypt needed Youssef Aboushousha and Omar Farag to change the course of events.

Egypt remained scoreless for the first four minutes until Farag sank the game-changing three-pointer. Aboushousha followed it up with another three-pointer as Egypt cruised to their first win in the tournament.

But the best of Egypt was kept for last with Ehab Amin being a one-man show for the ‘Pharaohs’ .

Egypt center Anas Mahmoud suffered a shoulder injured and, according to the team, is expected to sit out the next two games.

In the opener of the tournament, Guinea knew too well what to expect from the reigning African champions Tunisia.

When the two sides fist met in the Group Phase of the AfroBasket 2017, Guinea demonstrated tremendous resilience for most of their 64-59 defeat.

Guinea stepped on the court on Wednesday for Group A’s first game looking to seal their first win in the history of the tournament since 1985 when they beat Kenya, but Tunisia prevailed 82-46 in the one-way encounter.

Salah Mejri, who scooped the MVP award of the 2011 edition of AfroBasket, set the tone for Tunisia, finishing with game-highs 17 points and four block shots; Michael Roll added 14 points, and Omar Abada, the other Tunisian to score in double digits, contributed 10 points. With nine points, Cheick Sekou Conde led Guinea in scoring with nine points

Tunisia opened the score sheet through two free-throws from Makram Ben Romdhane, and they never looked back, leading by as many as 41 points at some points in the game.

In Thursday’s Group B action, Tunisia will go up against Egypt while Guinea will take on the Central African Republic.