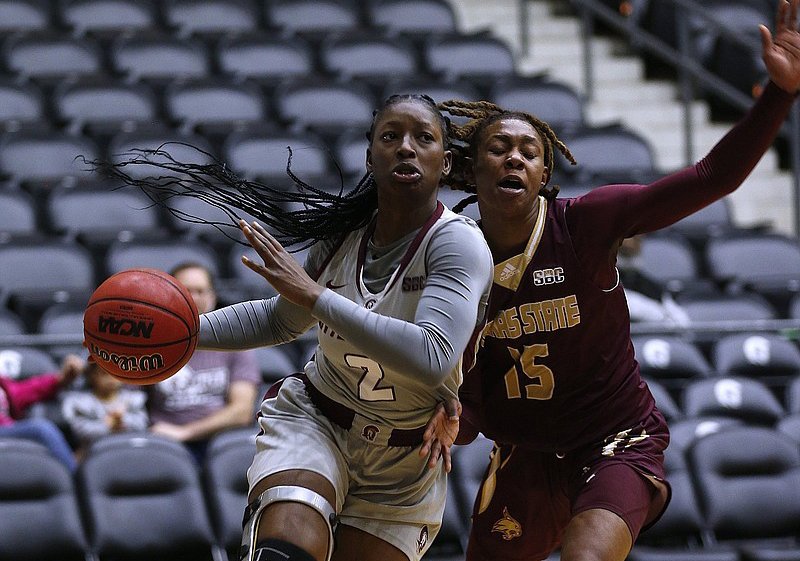 A disjointed season for the University of Arkansas-Little Rock women’s basketball team ended with a 62-59 loss to Troy on Sunday afternoon in the semifinals of the Sun Belt Conference Tournament.

Coach Joe Foley’s Trojans went down fighting at Pensacola Bay Center in Pensacola, Fla. UALR, which had seven consecutive games canceled in December and January only to rebound by winning nine of 10 down the stretch, battled from the opening tip to final buzzer against Troy, the Sun Belt’s top seed and highest-scoring team.

UALR redshirt sophomore forward Sali Kourouma scored 27 points, including 18 in the game’s first 16 minutes. The Trojans led 28-17 with 3:59 to play in the first half.

Senior Rayzia Potter added 14 points and 4 rebounds for UALR. The Trojans (17-11) trailed 58-50 with 5:26 to play in the fourth quarter but pulled within 61-59 on a three-point play by Potter with 1:24 left. UALR got the ball back twice after defensive stops in the final minute, but shots by Potter with 42 seconds left and Kourouma with 9 seconds would not go down. Troy (24-7) was able to run out the clock to advance to today’s championship game against Texas-Arlington which defeated Louisiana-Lafayette 75-65 in the other semifinal.

“We had two or three good shots at the basket there,” said UALR assistant Steve Wiedower, who has been subbing all week for Coach Joe Foley at news conferences. “If either one had gone in, it would have been a totally different game at the end.”

Foul trouble and rebounding worked against UALR during the game’s final 24 minutes. Kourouma was limited to 30:08 on the court because of foul trouble. Kourouma picked up her second with 3:59 to play left in the first half with UALR up 11 points and was called for a third with 6:59 to play in the third quarter and UALR leading 36-35. Kourouma left the game each time, and the second time she returned to the floor the Trojans trailed 39-36. UALR was outscored 12-2 during the two stretches Kourouma left the game.

“When she got in foul trouble, and we had to bring her out, that hurt us on offense,” Wiedower said.

Troy, known for its scoring (80.0 ppg) and rebounds (51.4 rpg) got untracked in the second half, but Coach Chanda Rigby said she knew her team was in for a fight against Foley, who she has been coaching against for 10 seasons.

“They had such a great game plan,” Rigby said of Foley and the Trojans. “We know we don’t have to win rebounding, we have to dominate the rebounding war.”

Which is what Troy did in the second half.

“I know the magnitude of getting a victory over the Godfather of our conference,” Rigby said.